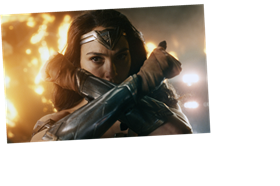 On one hand, “Zack Snyder’s Justice League” is revolutionary. The filmmaker has said the film represents his unadulterated vision — all four hours and six chapters of it — beamed directly into the homes of eager fans via a robust streaming platform, the only distribution method that could economically support the $70 million undertaking.

Theatrical? Out of the question.

“It has no business existing — a four-hour version of ‘Justice League,’ are you kidding?” Snyder said in an interview with IndieWire. WarnerMedia “didn’t have any notes, not really. The notes they had I didn’t do.”

Realization of vision and profit have long been opposing forces in battles between filmmakers and studios, from Ridley Scott’s 25-year effort to make a definitive “Blade Runner” to the same time it took after Sergio Leone’s death to piece together a full “Once Upon a Time in America.” For “Justice League,” it was just three years after the birth of the hashtag movement #ReleasetheSnyderCut that the stars aligned, when studio and director found themselves in the rare position of being on the same side.

WarnerMedia’s blank check to Snyder may be revolutionary, but the corporate logic behind it is anything but. In fact, it represents an execution of a formula for streaming success already perfected by Disney+: giving people exactly what they want — new riffs on old IP. “They love setting up sequels,” said Wedbush analyst Michael Pachter. “Just like how Disney+ is doing 10 ‘Star Wars’ shows.”

If you’re hoping that HBO Max’s investment in the Snyder cut will usher in a sea change of directors being handed huge budgets and unlimited freedom, either for new projects or directors cuts, that’s unlikely. While there will always be space for high-profile, high-cost, and theatrically impossible films on streaming services —see the three-and-a-half-hour “The Irishman” that cost Netflix $160 million — “Zack Snyder’s Justice League” is more a product of phenomenal timing.

“When the movie originally came out, there was no HBO Max,” producer Deborah Snyder said. “This was just the perfect storm of so many things, I think, with the fanbase that has been so dedicated.”

WarnerMedia has widely been viewed as fumbling HBO Max’s May launch. Back in July, parent company AT&T reported some 36.3 million legacy HBO and HBO Max subscribers, though only 4.1 million activations of the HBO Max app, suggesting there wasn’t enough to entice most old-school HBO subscribers to use the new service, let alone bring on new users.  A month later, Disney reported 60.5 million Disney+ subscribers in its first 10 months (though that service, unlike HBO Max, is available internationally).

HBO Max just wasn’t standing up to the streaming-wars frontrunners — Disney, with its exploitation of “Star Wars” and Marvel, and Netflix, whose huge subscriber base equates to a must-watch watercooler hit every week — but the pandemic gave WarnerMedia the chance to make bold moves: In December, the company announced Warner Bros. entire 2021 theatrical slate would be available day-and-date on HBO Max.

“WarnerMedia is making quite a lot of noise and bringing very, very big titles to HBO Max,” said Tal Chalozin, co-founder and CTO of streaming marketing platform Innovid. “The TV business is a very quote-unquote easy business: You need good content to feed the beast all the time. Good content attracts people who stay connected to the service.”

Early results show that HBO Max’s disruptive moves could be making a difference. There were some 41.5 million HBO and HBO Max subscribers by the end of 2020, which accounts for those who signed up in response to the first day-and-date release, “Wonder Woman 1984.” The service plans to launch in June a cheaper, ad-supported tier for the first time, while it will be expanding to 60 markets outside the US this year.

All of that could help HBO Max inch closer and closer to 150 or 200 million subscribers, the common numbers-to-beat cited in the streaming world that set leading services apart from the pack, Chalozin said. (Netflix crossed the 200 million mark for the first time in January.)

“That’s the inflection point,” Chalozin said. “This is why [services] need to pay the big bucks ahead of time to build that up very fast.”

Indeed, at AT&T’s investors day Friday — one week before the Snyder cut release — the company said it now has higher expectations for HBO Max. When the service was introduced in October 2019, it estimated it would have between 75-90 million subscribers by 2025. Now, the company is aiming for as many as 150 million by that time.