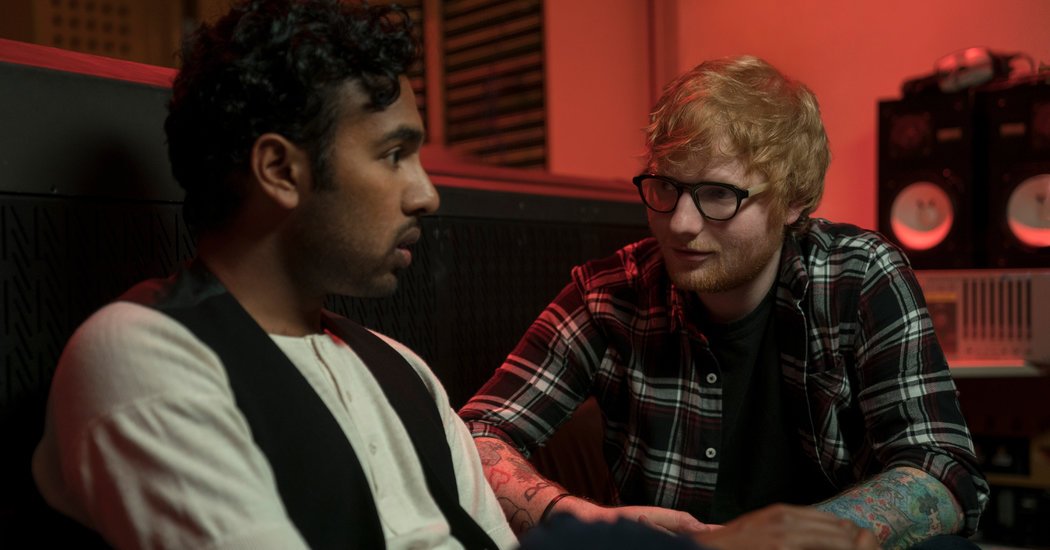 While it would be too harsh to call Jack Malik a real nowhere man, that’s where his musical career seems to be going. A modestly talented songwriter with a decent voice and busker-grade guitar skills, Jack — played with a winning mixture of moodiness and wit by Himesh Patel — decides to give up on his rock ’n’ roll dreams and go back to teaching school.

This is devastating news to his biggest and quite possibly only fan, Ellie (Lily James), who is also his road manager, chauffeur and best friend. She’s carrying a torch for him visible from across the universe, which Jack is too confused or self-absorbed to notice. With a love like that, you’d think he would be glad.

Of course, since “Yesterday” is a romantic comedy of sorts with a script by Richard Curtis (“Notting Hill,” “Love Actually,” etc.), it seems likely that Jack will find his way to Ellie sooner or later. We’ve seen that road before. This time, his awakening will require a bump on the head and a small but significant tear in the fabric of reality as Jack and the rest of us know it.

“I don’t believe in Beatles,” John Lennon once sang. This silly and sincere pop confection, energetically directed by Danny Boyle (“28 Days Later,” “Slumdog Millionaire,” etc.), wonders what might happen if nobody else did, either. After a traffic accident mysteriously connected to a global power outage, Jack wakes up to discover that the Fab Four have been erased from the collective cultural memory. A Google search turns up pictures of insects. There’s a gap in the B section of Jack’s record collection. When he sings “Yesterday” for Ellie and some other friends, they’re blown away. They want to know when — how, for whom — he came to write such an amazing song.

Suddenly, Jack is 10 times the man he used to be. “Yesterday,” meanwhile, scrambles to figure out what to do with its daft, ingenious premise.

One thing it doesn’t do — thank goodness — is explain why the Beatles vanished, and why Jack is apparently the only person on the planet who remembers their music. (A few other familiar items have been similarly deleted, but to name them here would steal some of the movie’s hard-won chuckles.) The absence of pseudoscientific or supernatural reasons is crucial to sustaining the mood of breezy romantic wonder and soft, cheeky comedy. The best response to “Yesterday” is to stifle the pedantic voice in your head, the one that wants to know what would happen if Jack searched online for Wings, the Plastic Ono Band or the Concert for Bangladesh. Let it be.

But what is it, exactly? For a while, “Yesterday” feels like a familiarly Richard Curtis-y type of winsome, self-deprecating Brit-com. People say clever things that might sound cruel in a different accent, while looking at the tops of their shoes or diffidently tossing their heads. At moments of strong feeling, they laugh-cry or hold back tears until the theater fills with audible sighs and sniffles. Patel is charming. James is charm itself. Joel Fry plays the kind of goofy friend who used to be played by Rhys Ifans.

Jack tries to get his parents (Sanjeev Bhaskar and Meera Syal) interested in “his” music, but they prove to be the only people on earth impervious to the appeal of the Lennon-McCartney-Harrison songbook. Everybody else is just as hungry for those hits as everybody really was 50 years ago. They’re guaranteed to raise a smile, and to make a lot of money. Once Jack and Ellie cut a demo (with an affable engineer played by Alexander Arnold), “Yesterday” expands into a gentle satire of the music industry wrapped in a mellow retelling of the Faust legend. Kate McKinnon takes Mephistopheles duty as a music industry shark who tempts Jack with wealth and fame beyond all imagining.

In exchange for what, though? Eventually, the plot narrows to a choice between love and success, but since the success doesn’t really belong to Jack the stakes are a bit muddled. The ease with which the world (except for Jack’s mom and dad) embraces the self-evident greatness of the music put out under his name irons out some potentially interesting wrinkles. Here my inner pedant will not shut up: What if the popularity of the Beatles’ music was as much a product of a specific time and set of circumstances as the music itself? What if, on first hearing “Yesterday,” Jack’s friends took it for an obscure Mumford & Sons B-side?

A bit later, Jack meets Ed Sheeran, who is gamely played by Ed Sheeran. Sheeran proposes a songwriting contest, with the winner to be decided by polling assembled backstage hangers-on. In 10 minutes, he comes up with something about a penguin, which Jack answers with “The Long and Winding Road.” Game over. Vote canceled. Sheeran manfully accepts his humiliation and bows to the greater talent. “I’m Salieri,” he gallantly admits.

A more interesting — and I would argue more likely — outcome would be for Jack to come in second, accepting the condescending approval of his listeners. Nice try, mate, but come on. He’s Ed bloody Sheeran! Aesthetic quality may be absolute (or not!), but popular taste, especially when it comes to new things, is notoriously fickle and contingent.

I’m sure the filmmakers have a good reason for taking the easy way out, but “Yesterday” is more of a novelty earworm than a classic. It’s appealing and accessible in a way that the Beatles never really were. If it took itself — and them — a bit more seriously, it would be a lot more fun. But it wasn’t made to last.

Rated PG-13. Now they know how many holes it takes to fill the Albert Hall. Running time: 1 hour 56 minutes.

A.O. Scott is the co-chief film critic. He joined The Times in 2000 and has written for the Book Review and The New York Times Magazine. He is also the author of “Better Living Through Criticism.” @aoscott