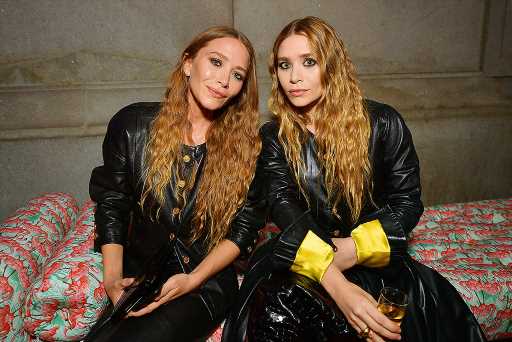 Nick Cannon, Tyra Banks, America Ferrera and more prove that it is never too late to hit the books – even if you’re a star

In 1999, the 18-year-old actress enrolled at Harvard University, graduating with a degree in psychology. The actress famously said of her decision, “I don’t care if [college] ruins my career … I’d rather be smart than a movie star.”

Fun fact: Portman was a senior at the university when Mark Zuckerberg created Facebook.

Both Olsens famously enrolled in New York University, bought a $7.3 million penthouse in the West Village and then decided to leave school in order to “pursue personal interests” and run their company, Dualstar Entertainment.

The basketball legend got his career start at Louisiana State University, but left after three years to turn pro. He promised his parents that he would eventually graduate, and made good on that promise in 2000, when he finally earned his bachelor’s degree after seven summers of hard work.

Haley Joel Osment graduated from NYU’s Tisch School of the Arts in 2011, choosing to perfect his craft in the classroom rather than on the big screen.

He told The New Yorker in 2014, “A film like The Sixth Sense burns an image of who you are into people’s minds. In the midst of that it can be difficult to know who you are, or who you are becoming. College seemed like a manageable next step, a place where I could figure that stuff out.”

Daughter of Mick Jagger and Jerry Hall, Georgia May was already making a name for herself as a model when she decided to enroll at the New York School of Visual Arts in 2010. She studied photography.

Shields, who had been acting and modeling since she was just 12 years old, decided to take a break from Hollywood to get an education. She graduated from Princeton University in 1987 with a degree in French literature.

Talk about an overachiever! Foster made five films, turned in her term papers early and earned straight As at Yale. The actress earned a degree in Literature in 1985.

Cosgrove is currently studying psychology at the University of California, where she enrolled in 2012. The Nickelodeon star was originally studying film, but explained in December 2017 on Live! with Kelly and Ryan that she changed her major with just one year left in her studies.

In November 2017, the producer wrote on Instagram, “Today I will become Harvard alumni and although I’m not getting an ‘MBA’ no one can EVER take this accomplishment away from me.” He graduated from Harvard Business School’s Owner/President Management Program.

It may have taken 17 years, but Judd finally graduated from the University of Kentucky in 2007 with a bachelor’s degree in French. Judd had left school just one course shy of a degree for a career in acting.

In 2016, Judd decided that it was time to go back to school, announcing on Facebook that she had been accepted into a Ph.D. program for public policy at UC Berkeley.

Shue, who began her career with a role in The Karate Kid, had to put her Harvard degree on hold in 1985 in order to star in films like Back to the Future and Leaving Los Vegas. She did eventually return in 2000 to finish her political science degree, but only after getting nominated for an Oscar.

Stiles studied English Literature at Columbia University while making films like The Bourne Identity and appearing on SNL. When asked how she managed to juggle it all, Stiles told Rolling Stone, “I think about that all the time, I really do. Somehow I just do it. But college will help me as an actress, because it makes me more interesting.”

Fanning is still pursuing a degree from the NYU Gallatin School of Individualized Study, where she is studying “film and the portrayal of women in film.” She said on Today that it’s taking her a bit longer to graduate, but “it’s something that’s important to [her] and [she] knows [she’ll] be happy when [she] accomplishes it.”

What’s cooler: Being accepted to Harvard University or getting Michelle Obama to write you your letter of recommendation? Shahidi doesn’t have to choose. The Black-ish star originally deferred her acceptance to the Ivy League school for one year to work on some projects, but is currently a freshman at the university.

Danes didn’t end up finishing her degree in psychology and fine arts at Yale (she left after two years), but told Howard Stern in 2018 that her time at the Ivy League “felt sufficient,” adding, “Mostly I just, like, smoked pot and played Mario Tennis with my friends.”

Paquin already had an Oscar under her belt (she won in 1993 for her role in The Piano) when she enrolled at Columbia University in 2001. She ended up dropping out to return to Hollywood, but her famous classmates included Julia Stiles and Joseph Gordon-Levitt.

In 2016, the Wild ‘n Out host revealed he’d enrolled as a freshman at Howard University — at age 35. (But did he try out for the Drumline?)

Not only did Banks go back to school, enrolling in Harvard’s Owner/President Management Program in 2012, she even taught a class at Stanford’s business school. The course focused on how to use social and traditional media to one’s advantage.

The man loves learning! Franco grabbed his undergraduate degree from UCLA in 2008, and in 2011, he moved to New York City to attend Columbia University’s MFA writing program, New York University’s Tisch School of the Arts for filmmaking and Brooklyn College for fiction writing, all before enrolling in Yale’s Ph.D. program.

The twin brothers started young, playing kids in films like Big Daddy and The Astronaut’s Wife before making the move to TV with roles on Friends (for Cole) and eventually their own series, The Suite Life of Zack & Cody. When their time with Disney was up, both enrolled at New York University, graduating in 2015. They’ve since returned to the spotlight, with Cole starring on Riverdale and Dylan appearing in several upcoming films.

When Gordon-Levitt enrolled in Columbia University in 2001, he was already super-famous for his roles in 10 Things I Hate About You and 3rd Rock from the Sun, which is why it wasn’t the worst thing ever when he dropped out in 2004 to get back to acting.

Taking a brief hiatus from acting, the Harry Potter star enrolled at Brown University in 2009 and graduated with a degree in English Literature in 2014.

The actress received her master’s degree from California State University Northridge in 2013 — while she was still filming Desperate Housewives. Her degree was in Chicano and Chicana Studies.

Life imitates art … imitates life. Bialik played a super-nerd on The Big Bang Theory — and also happens to be one (and we mean that in the best possible way). After starring on Blossom as a teen, she got her undergraduate degree from UCLA in 2000 and earned her Ph.D. from UCLA in 2007.

During the fall semester of 2001, long after he’d become an iconic director, Spielberg sat down and wrote the term paper for his Natural Science 492 class at Cal State Long Beach, allowing him to finally earn that one missing credit and thus his Bachelor of Arts – 37 years after he had first enrolled.

When Winfrey dropped out of Tennessee State University to pursue media, it certainly paid off. But in 1987, the talk show queen returned to finish her degree in Communications.

The actress was offered her starring role on the ABC sitcom Ugly Betty in 2002, right before she was to begin her freshman year at USC. She took the role, as her acting career continued to take off, and returned to USC in 2008, graduating in 2013.