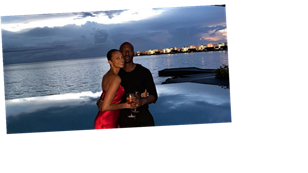 She's been posting pictures from her family holiday in the Maldives, and now Alesha Dixon has paid tribute to her husband Azuka Ononye with a series of snaps to celebrate his birthday.

The Britain's Got Talent judge, who brought the glamour at the show's Christmas special, looked stunning in a red silk dress as she cuddled up with her other half.

The pair looked like the epitome of happiness as they enjoyed some drinks, with a stunning skyline behind them.

The former Mis-Teeq star received comments from her celebrity friends who complimented the couple.

While This Morning's Dr Zoe Williams said: "That made me smile. A lot."

The television personality's tribute on her husband's birthday comes after she threw daughter Azura, 7, an incredible Trolls-themed birthday party in October.

Azura was treated to a three-tiered Trolls cake, which featured the little one's name in the middle, as well as two giant trolls at the top.

The singer showed her fans inside the mind-blowing event and wrote on Instagram: "In these crazy times we unfortunately couldn't have Azura's birthday party with her friends there.

"However, thanks to @Trolls and @Smythstoys, we were able to host a Trolls Fest Virtual Party, where all of her friends joined her on Zoom to celebrate with lots of Trolls party games.

"Thank you so much to Smyths for hooking up all her friends with amazing presents, so generous of you! All involved had such a brilliant day!" she expressed.

Alesha, who previously supported Diversity's BLM inspired routine on Britain's Got Talent, got married to Azuka in 2017.

The pair first met in 2006 on Britain's Got Talent, where Alesha is a judge and Azuka was a dancer.

The couple are parents to daughters Azura, seven, and Anaya, one.