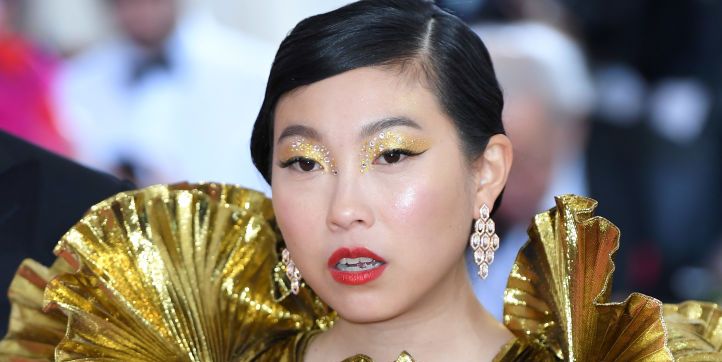 As if you already didn’t love Awkwafina, the rapper-comedian-actress is giving us more to love about her by answering our most pressing questions in Vogue‘s 73 Questions. While serving the camera alllll of her lax energy, one thing became abundantly clear throughout the entire video: Awkwafina sounds eerily like Miley Cyrus. Crazy, right? I know it’s not just me! Perhaps it’s the inviting raspiness of their voices or that they both have deeper voices, but like…the similarities are THERE. And apparently, 4,300 people seem to agree.

During the video, Awkwafina took Vogue’s cameraman around Los Angeles’ Koreatown and was asked a bunch of questions about her life, her personal interests, and of course, the crazy success that came with starring in last year’s Crazy Rich Asians.

Of her game-changing role in Crazy Rich Asians, Awkwafina says that she pretty much had no idea how much representation mattered until the movie came along. “You don’t realize how important [representation] is until you realize you’ve been missing it your entire life,” she said.

Awkwafina, like all of us, is a HUGE fan of Game of Thrones—so relatable! When asked who she wanted as her travel companion, she didn’t skip a beat in saying Jon (Bae) Snow. “I think he’d be a little reluctant at first, and then he’d be really helpful along the journey,” she said, later adding that her dream film casting would be her and like, four of the GoT dragons. I mean…it makes sense!

Wanna gush over how cool Awkwafina is? Watch the video and deepen your girl-crush on her even more, below.