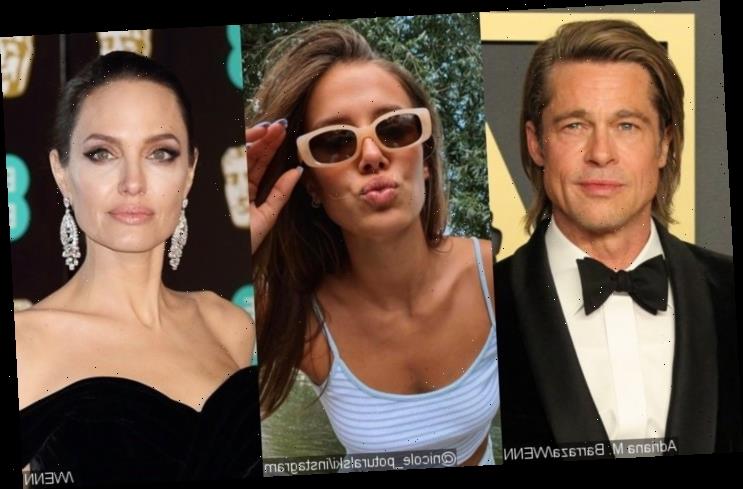 The 27-year-old German model, who is rumored to be dating the ‘Once Upon a Time in Hollywood’ star, addresses rumors that she and Brad are hating Angie in an Instagram post.

AceShowbiz –Brad Pitt‘s girlfriend Nicole Poturalski is setting the record straight. The 27-year-old German model, who is rumored to be dating the “Once Upon a Time in Hollywood” star, addresses rumors that she and Brad are hating Angelina Jolie in her response to a fan’s question underneath her Instagram post.

In the Tuesday, September 15 post, Nicole was seen wearing an orange button-up dress. She completed her look with chic sunglasses and a small purse. “Happy people dont hate,” so she wrote in the caption.

The message piqued one of her followers’ interest as the person later asked, “If so, then why do you and Brad hate Angelina?” The troll continued, “Practice what you preach, girl.” Nicole quickly denied the accusation that she and Brad hate his ex-wife Angelina, saying, “Not hating anyone.”

Rumors that there’s tension between the pair and Angelina emerged online after the actor took Nicole to Chateau Miraval in France, where he and the “Maleficent” star held their wedding six years ago. The former husband and wife, who share six children, Maddox (19), Pax (16), Zahara (15), Shiloh (14) and twins Vivienne and Knox (12), also purchased the chateau together in 2011.

“Taking Nicole to Miraval on their former wedding anniversary, Brad knows exactly what he is doing and the reaction it’s going to get from Angelina,” a source previously told Us Weekly. “He just doesn’t care if Angelina is going to lash out. He expects she will.”

Of Brad and Nicole’s relationship, another source said that the two have been “enjoying” their time together. “Not only has Brad fallen for her beauty; Nicole is young, carefree, fun to be around and intelligent,” the so-called insider dished. “Brad feels Nicole is a breath of fresh air.”

A second source revealed what qualities of Nicole that attracted Brad. “Nicole is mature beyond her years, educated and well-traveled,” the insider spilled. “They share a passion for the arts and have a ton in common.”