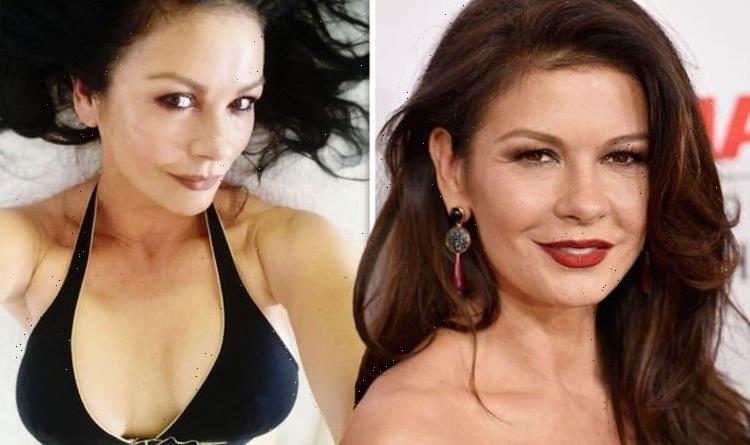 Catherine Zeta-Jones flaunted her impeccable physique in a risqué selfie today. The Darling Buds of May actress commanded attention as the ageless beauty left her fans speechless.

The film star uploaded a sultry snap as she showcased her flawless makeup.

It didn’t take long for her 3.9 million followers to flock to the mum-of-two’s social media account.

Sporting a black bikini top, Catherine put on a very busty display in the jaw-dropping photo.

The garment featured a gold trim along with a ribbon detail at the centre.

She could be seen laid out on a towel as she took a selfie.

Her signature dark tresses were splayed above her head in loose waves.

Catherine showed off her youthful appearance while rocking a smokey eye and burgundy lips.

The actress received over 20,000 likes in just under an hour after she shared the busty picture.

Her legion of followers flooded the comment section, as Christie wrote: “You look wonderful.”

Carmen commented: “How beautiful are you.”

Suzy wrote: “The Queen,” while Mici added: “You are truly beautiful.”

Although Catherine did not confirm where she is spending the festive period, the actress often shares photos from tropical locations alongside her husband Michael Douglas.

The picture comes after the Legend of Zorro actress admitted she has battled with “insecurities”.

She added that she has grown in confidence over the years and shared that it has come with age.

“Personally, I would never consider myself a great beauty but my mother always told me to make the best of myself,” Catherine told The Sydney Morning Herald.

The actress added: “There’s a confidence I’ve sometimes had to put on when I walk down a red carpet. I have my insecurities like every other woman.

“But as I’ve got older, I’ve got much more confident about the way I look.”