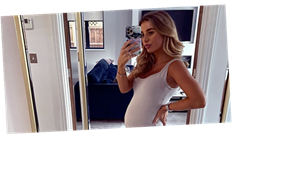 Dani Dyer has revealed she's felt her baby move for the first time.

The 24 year old has an anterior placenta – which is completely normal, and should not cause problems for the baby's development. It means that Dani's placenta is in front of her uterus, so it acts like a cushion and minimises feeling.

However, during a Q&A session with her legion of followers, the former Love Island star made it known that she's finally felt her baby move inside her.

Answering one of her fans, who asked whether she always feels movement, Dani wrote: "As I said before I have an anterior placenta so might take longer for stronger movement and for Sammy to be able to feel it.

"But yesterday I really felt the baby move and I was sitting there giggling like an idiot," followed by a laughing emoji.

"If I lay still and really focus I can feel baby move around it's honestly the best thing ever. It's like a massive cuddle every time," she added alongside a red heart emoji.

Dani, who recently showed off her blossoming baby bump in a gorgeous lilac swimsuit, previously opened up about her pregnancy condition.

The star was wearing her pink dressing gown and glasses as she sat down to give her 3.3million fans an update on how she's doing.

On the anterior placenta, Dani said: "It's basically my placenta is at the front [of the uterus] so it cushions the baby, so they said I might not be able to feel the kick and movements as much.

"I was like 'what other ones [placentas] are there?' but I thought as long as the baby's healthy, stop stressing about it.

She also confirmed that she's 19 weeks pregnant and that she's "nearly half way" which she says "is mad".

Dani, who recently hit back at fans after she "accidentally revealed the gender of her baby", said: "I'm now 19 weeks, it's so mad that I'm nearly half way.

"It's just so so exciting, but I've been OK, now and again I am getting headaches, I'm not going to lie … but other than that I've been having a lot more good days than bad which is really nice.

"I'm having more energy, which is good."

Dani is expecting her first baby with boyfriend Sammy Kimmence and the couple are excited about their new arrival.