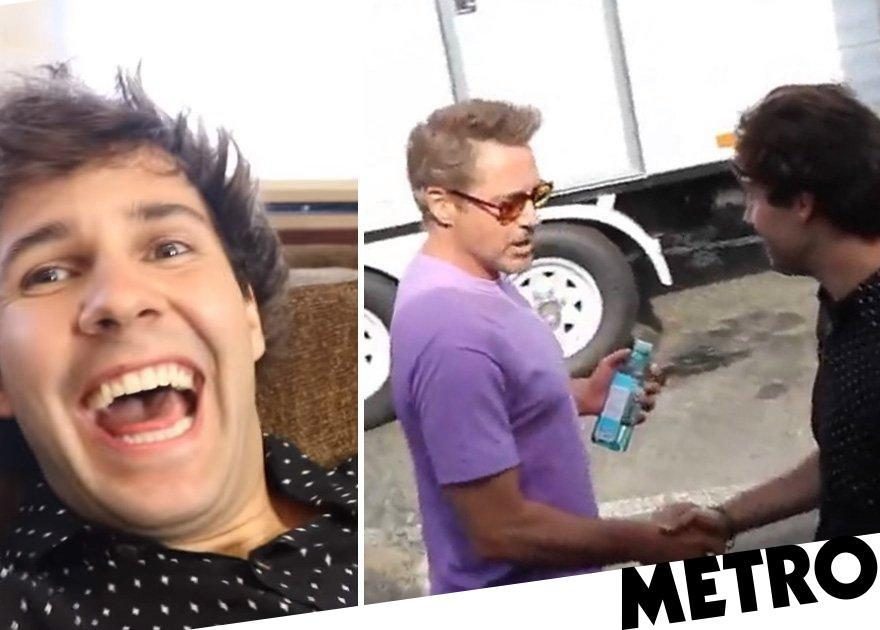 YouTuber David Dobrik has fully fangirled over Avengers’ Robert Downey Jr and we can’t blame him in the slightest.

The YouTube star, who recently won his first Teen Choice Award, shared a video of himself meeting the star before the ceremony.

Popping his head out of his trailer when the Iron Man star arrived, David gushed: ‘Hey, I’m a big fan,’ before laughing: ‘I don’t know what else to say, I should have rehearsed my lines.’

‘Tell me everything,’ the 54-year-old replied.

‘I’m David. You’re my favourite person in the world,’ David told him, before cutting the video to himself recovering afterwards.

Co-hosted by Lucy Hale and David Dobrik, the Teen Choice Awards celebrated all things entertainment, from TV and film to YouTube.

The greatest moment of my life. I love you iron man

Josh Brolin AKA Thanos won the best villain award, and are we really all that surprised?

On the YouTube front, David Dobrik won the Male Web Star award, with PewDiePie scooping up the win in the Gamer category.

Meanwhile, with fans still not over the latest installment in the Avengers series, Marvel boss Kevin Feige made everyone’s hearts break that little bit more when he revealed Robert filmed his final scene as Iron Man for Avengers: Endgame in the small studio next door to where he auditioned for the 2008 original film

Speaking to Empire magazine’s Chris Hewitt, the producer detailed what it was like filming Robert’s final scene.

At the end of Endgame he uses the Infinity Gauntlet to Snap Thanos to oblivion. In turn, of course, he killed himself – but not before uttering the brilliant words: ‘I am Iron Man.’

Speaking about the epic line, Kevin explained: ‘The idea came up very late in post, he used to say nothing, he used to say the f-word in one version that was screened but none of it was feeling the way we wanted to feel.

‘I think it was our editor Jeff Ford who had the idea “I am Iron Man”. Robert was a little hesitant, every time he had cathartic emotions going through it.

‘He did it and I don’t think we’ve talked about this – that was shot right across from the Paramount studios in a stage right next door to the stage where he did his audition for Iron Man I.

‘It’s the first time we’d been on that lot since.’