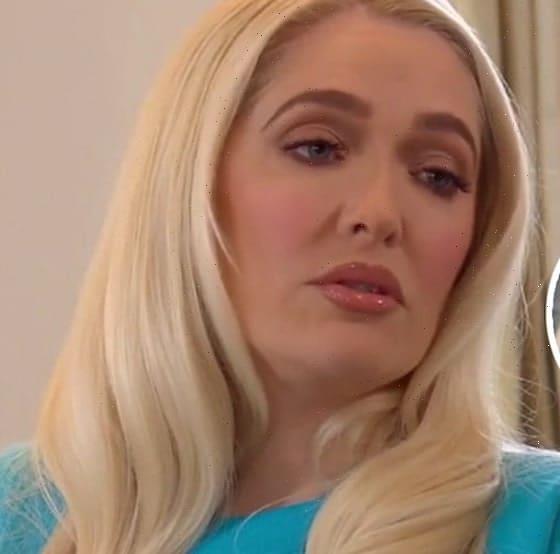 Over the last several weeks on The Real Housewives of Beverly Hills, Erika Jayne had been skating on thin ice when it came to her credibility.

No matter how many times the embattled reality star tried to explain to her colleagues that she played no role in her estranged husband’s alleged fraud scheme, Sutton Stracke and company expressed skepticism.

On Wednesday night, however?

Jayne may have fallen through the metaphorical ice entirely.

Enjoying a spa treatment at Kathy Hilton’s residence, Jayne and Kyle Richards talked about the former’s life and all the craziness that has enveloped thhe Bravo personality since she filed to divorce Tom Giradi in November.

Explaining to Richards that the “door is closed” when it comes making up with Stracke, Erika said the two would not be “working through” their issues.

This makes a lot of sense based on the heated back-and-forths between Erika and Sutton over the past few episodes.

What Jayne said next madee less sense, however.

“Tom’s house was broken into and he confronted the burglar and then had to go have eye surgery,” Erika unloaded on Kyle, adding in even more confusing detail:

“My son had to go over and help and then my son, he rolled his car five times on the way home. I’m under a lot of stress.”

The accused embezzler claimed this incident took place just a couple days earlier… before the cast gathered at Garcelle Beauvais’ house for a dinner party.

In a confessional, Richards said there seemed to be a dishonst “pattern” with Jayne because the friends often hang out and then Kyle learns later “there was this big situation in her life going on that she didn’t share with us.”

“When Erika withholds information, it just makes it harder to support her,” Richards said, referring in a broader sense to the accusations that Jayne helped Tom steal millions from his past legal clients.

Erika continued to speak on the episode about the alleged incident with Girardi.

She said the Pasadena Police Department called her at 3 a.m. about the break-in, yet she didn’t get the message until she woke up three hours later.

Jayne wasn’t certain why her ex had surgery, but believed it had something to do with his glaucoma and pressure.

As for her son’s crash? She said he was driving home in the snow (in Pasadena?!?) and rolled his vehicle.

“This story obviously sounds unbelievable,” Kyle admitted in a confessional. “That’s the only word I can think of. Does that mean I don’t believe her? No, but it’s unbelievable.”

Later, Kyle and Mauricio had Dorit Kemsley and her husband PK over for dinner — and PK came up with a theory.

“She’s been in a controlling marriage for 20 years and she’s still being controlled.

“I think Tom lied to Erika and Erika went along with it,” he hypothesized. “There’s no car rolling, there’s no 12 hours unconscious.”

“There’s lies all over the place,” added Mauricio, who took issue with Erika saying she wouldn’t allow a doctor to perform surgery on him after the first car-flipping incident.

“If a doctor comes to you and says we need to operate … who says no!”

Dorit, for her part, acknowledged that the tale was “bonkers” and that she believed details were being left out.

However, at the end of the day, she doesn’t think Erika is lying.

At this point, Dorit seems to be on an island when it comes to that point of view.

The Real Housewives of Beverly Hills airs Wednesdays at 8/7c on Bravo.