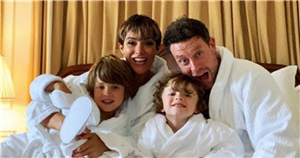 Frankie Bridge and her husband Wayne celebrated their milestone wedding anniversary by heading on a luxurious weekend break in Hampshire.

Never not on parenting duty, the two were joined for their break by their two sons, Parker, five, and Carter, three.

Former Saturdays singer Frankie, 30, shared a series of heartwarming family snaps from their hotel stay, where the foursome are dressed in cosy dressing gowns.

She captioned the snaps: “Happy 5 year wedding anniversary to us @waynebridge03.

“Our version of a weekend away has definitely changed over the 9 years we’ve been together! #family #love #anniversary.”

The night before their mini-holiday, the couple enjoyed a night out on the town in London’s Mayfair.

She shared a loved-up snap of the pair inside restaurant and bar Sexy Fish and wrote: "On a scale of 1 to 10… how obvious is it that I forced him to have this picture?!

Wayne, 38, also celebrated his milestone with his wife as he wrote on Instagram alongside a video: “Happy anniversary @frankiebridge. To be fair 5 years has flown by.”

Frankie and footballer Wayne began dating back in 2011.

They married in a private ceremony in July 2014, nine months after welcoming their oldest son, Parker.