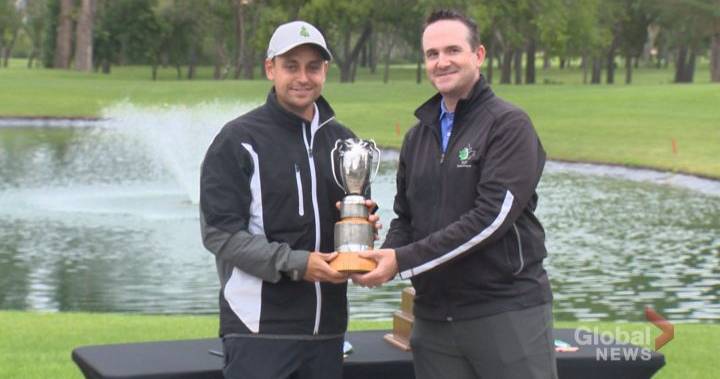 As Danny Klughart watched friend and co-leader Jehremy Ryde’s putt catch the edge of the cup and then lip out, he knew he was champion.

The Prince Albert native forced a playoff hole on Thursday, putting up a stellar 6-under 66, in the third — and what was scheduled to be final — round.

Klughart and Ryde began their playoff on the 18th tee box early Thursday evening, but following their drives they were forced to postpone the winner-take-all playoff to Friday morning, due to plough winds that littered the field branches with debris.

“I looked at my caddy and said, ‘we’ve got to get out of here, don’t go anywhere near the trees,’” Ryde said. “I had no intention of trying to hurry up to finish, [I] just [wanted] to get to safety.”

“I was like, ‘man, can we go in? This is insane,’” Klughart said. “Then Jehremy walked over and he [said] get away from the trees. [Then] a branch came down beside me and after that everyone was just sprinting for the clubhouse.”

“It was pretty scary.”

Conditions at the course were much better Friday morning following an extensive clean-up by the grounds crew at the Saskatoon Golf and Country Club.

With the tournament being extended by a day, the eventual champion needed a place to stay on Thursday night and found it from the very man he was competing against.

“Yeah, I stayed in Jehremy’s trophy room last night,” Klughart said. “It’s just his spare bedroom, [but] his trophies were out in full force.”

“Danny and [I] are great friends, we always have been,” Ryde said. “So I was glad to give him a spare room.”

When asked if any late-night “pranks” were pulled to potentially get Klughart off of his game, Ryde had this to say.

“I was trying to get my cat, maybe, to bug him a little bit, “Ryde said with a laugh.