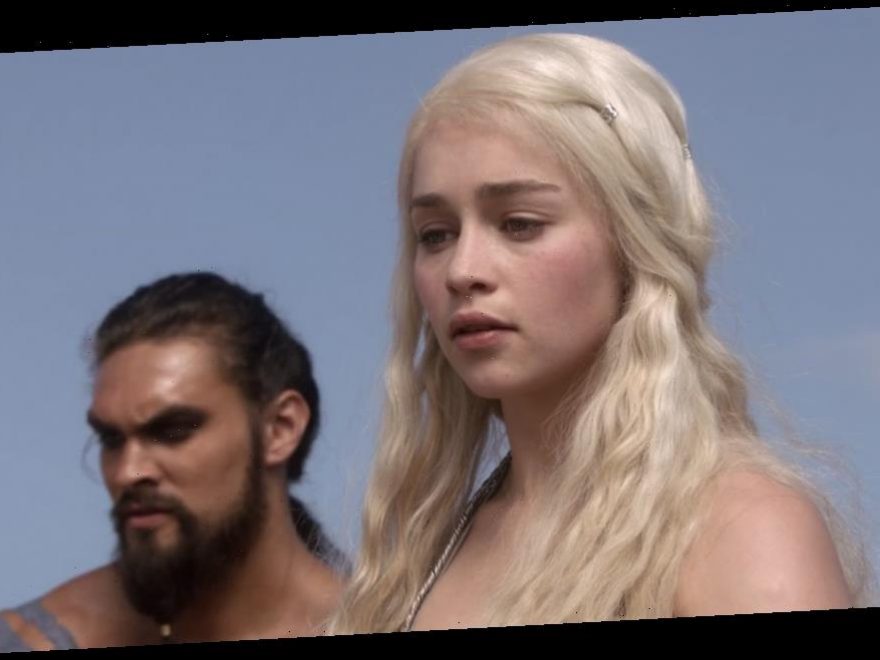 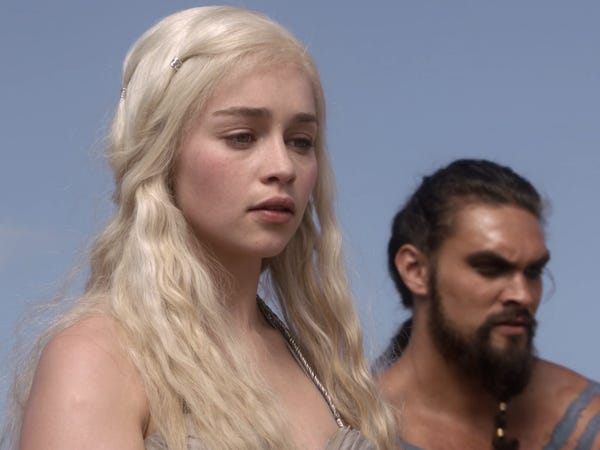 Since the very first episode of "Game of Thrones" aired in 2011, HBO's ambitious fantasy-drama series has been carefully scrutinized for its handling of sexual assault and rape in its storylines.

In "Fire Cannot Kill a Dragon," a new book about the series from Entertainment Weekly's editor-at-large James Hibberd, the story's original author George R.R. Martin says he and the showrunners never discussed one particular change: Daenerys Targaryen being sexually assaulted by Khal Drogo on their wedding night.

"It made it worse, not better," Martin said of this change to his story.

While it's true that their first sexual encounter is technically consensual in the books, Drogo proceeds to assault Daenerys repeatedly after their wedding night. It's what happens after that night that pushed showrunners to change that scene, they explained.

And when you look at the choices made in the series for other important female characters, who succumbed to the same abusive treatment, it's even more alarming how sexual assault and rape were treated in the HBO series.

So let's take a closer look at what happened between the Mother of Dragons and her first husband, and how this adaptation choice fits into the larger pattern of the HBO series.

In the pilot episode, Daenerys is introduced as an exiled princess of House Targaryen, a young woman cowed by her older brother Viserys' emotional and physical abuse. She's married off to the fearsome Drogo and warned she must please him on their wedding night.

So far, these basic plot points in the "Game of Thrones" pilot align with what's written in the opening chapters of Martin's first novel in the "A Song of Ice and Fire" series. But the show's cocreators David Benioff and D.B. Weiss decided to make two significant changes to Daenerys' character.

First she was aged up. In the books, Daenerys is just 13 years old. Martin's characters were following customs in line with the Middle Ages, where young girls were married off as soon as they experienced puberty and were of child-bearing age.

So while Dany was made four years older, Khal Drogo's age remained unchanged. He was somewhere around 30 years old, which held for the show.

The second big change was having Drogo rape Dany on their wedding night. In the books, Drogo seems to extend much more empathy towards Dany. The chapter is written from Dany's point-of-view, allowing the reader to understand her mounting fear and apprehension. When she and Drogo are finally alone together, and she's crying, Dany feels "a little better" when Drogo wipes away her tears and says, "No."

Then Drogo speaks in Dothraki and touches her hair while Dany feels "warmth" and "tenderness" in his words. Eventually Drogo sits and shows Dany how to untie his braids. Dany is still shy and afraid once it's "her turn," and Drogo begins undressing her.

Once she's fully naked, Drogo just sits and looks at her for "awhile," and then begins touching her hands, legs and face. Dany remarks that it seems as if "hours" had passed by the time Drogo's hands "finally went to her breasts." After more (for lack of a better term) foreplay, Drogo brings Dany on his lap, cups her face, and asks "No?" As Martin writes it, "Dany knew it was a question" and she replies "yes" as she moves his hand between her legs.

At first, Benioff and Weiss planned for the pilot to follow this same series of events. But then the showrunners recast the role of Daenerys and rewrote a majority of the pilot's scenes.

Dany's first sexual encounter with Drogo was changed to assault. He undresses her and bends her over onto her knees while she cries. Then the scene cuts away.

"Why did the wedding scene change from the consensual seduction scene … to the brutal rape of [actress] Emilia Clarke? We never discussed it. It made it worse, not better," Martin said in "Fire Cannot Kill a Dragon."

Benioff defended the change, saying: "Here's a girl who is absolutely terrified of this barbarian warlord she's being married off to, it's the last thing in the world she wants, yet somehow by the end of this wedding night she seems to be in a completely joyful sexual relationship with him. It didn't entirely work for us."

"Also, in the second episode she has to go back to the less consensual, rougher relationship," Weiss said. "In the book that works, but we just didn't have that amount of time and access to the character's mind. It turns too quickly. It was something the actors themselves felt wasn't gelling."

Weiss went on to say that Clarke "mentioned the wedding night and issues she was having with it" too, noting that the two were on the same page.

So what, exactly, happens in the books after their wedding night?

In the chapter that follows their wedding night, Dany describes the intense pain that came from learning to ride a horse as she began traveling with Drogo's khalasar. The chafing and blisters on her legs and bottom made Dany feel like she was going to die. And Drogo himself only made it worse by coming into their shared tent each night and raping her.

"Drogo would come to her tent and wake her in the dark, to ride her as relentlessly as he rode his stallion. He always took her from behind, Dothraki fashion, for which Dany was grateful; that way her lord husband could not see the tears that wet her face, and she could use her pillow to muffle her cries of pain."

The passage goes on to say that Dany would be in too much pain afterward to fall back asleep. This cycle went on for so many days that Dany decided "she would kill herself rather than go on."

But the same night Dany was close to succumbing to suicidal ideation, she had a dream about a dragon covered in her blood. It was a recurring dream — one that invigorated her and made her feel "strong and new and fierce" when she awoke.

It's after this dream that Dany begins operating with more agency in the khalasar and learns to love riding her horse. Eventually she decides to seduce Drogo, just as she does in "Game of Thrones."

But Benioff and Weiss are right that the whiplash of Drogo and Dany's relationship wouldn't have made much sense to viewers — it barely makes sense to readers, especially when you have to square her loving and romantic feelings towards the man later.

In Martin's version of events, 13-year-old Daenerys is married against her will, and on her wedding night finds her much older husband to be more empathetic than expected. Their wedding night may have been unexpectedly tender, but it doesn't change the circumstances nor the shocking age difference between them. Historical accuracy aside, readers and TV watchers alike in modern times should find it upsetting to think about a child being seduced by a grown man.

Benioff and Weiss recognized this sensitivity and the leap the two characters would have to make, and made the reasonable choice to show Dany's abusive situation in a more straightforward way.

That doesn't mean they're entirely off the hook for the way their adaptation handled sexual assault overall, though.

Over the course of the eight-season run, which ended May 2019, three of the most prominent female characters in "Game of Thrones" were assaulted or were victim to nonconsensual sex during scenes that weren't written in the books.

The first, as we've covered, was Dany's wedding night. The second happened in season four when Cersei and Jaime reunite after not seeing each other since he was captured by Robb Stark's army. Cersei is deeply upset and initially hesitates, but eventually has sex with her brother next to the corpse of their incest-born son.

Although the episode's director and actor Nikolaj Coster-Waldau, who played Jaime, believed it to be complicated yet ultimately consensual, it wasn't. The final cut of the episode, which is the only one that aired and that fans have seen, shows Cersei repeatedly saying "no" and crying.

The third time was in season five when Sansa, newly married to Ramsay, was raped on their wedding night. In the books, Ramsay doesn't marry Sansa at all. Instead he's wed to Sansa's childhood friend, a young girl who's being passed off as Arya Stark in part to give the Bolton's more power.

Sansa's assault storyline in the TV adaptation has been discussed and critiqued among fans perhaps more than any other change Benioff and Weiss opted to make.

In "Fire Cannot Kill a Dragon," a whole chapter is dedicated to the scene. The book quotes the show's biggest female stars — Clarke, Sophie Turner, Natalie Dormer, Maisie Williams, and Gwendoline Christie — who mostly use the argument that "Game of Thrones" and Martin's original story were presenting a "real" threat women faced, both in the Middle Ages and now.

But the criticisms about the pattern of sexual assault in "Game of Thrones'" main characters was never that a TV audience should never be challenged by a realistic depiction of abuse. Instead it was about including more sexual assault in a story already filled with plenty of examples of what women in that time period faced.

"I'm not opposed to shows depicting sexual violence, but rape-as-prop is always distressing, particularly in a show like this, where that disregard echoes the kinds of ideas that foster rape culture in the first place: that women's feelings don't matter, that sexual agency isn't a big deal, that rape is something that just kind of happens and that healthy people simply move on," Vulture's Margaret Lyons wrote after Cersei's rape scene aired in 2014. "Rape and abuse have consequences for the victims who carry those traumas with them."

Another significant failure of these plot points was how Sansa was the only character who seemingly contended with her trauma onscreen. She escaped her marriage and eventually reclaimed power over the Boltons by being crowned Queen in the North. But Daenerys' feelings about Drogo's attacks were never meaningfully explored in the books nor the show. Cersei also never appeared to seriously contemplate Jaime's assault. This was not only a disservice to the characters, but also the viewers.

When we reflect on the legacy of the show, and where it began, Dany's wedding night is an important starting point for the conversation around sexual assault and how it's depicted for a wide-ranging audience. Martin may take issue with the change to this early scene, but really it was the later shifts that were much more concerning.