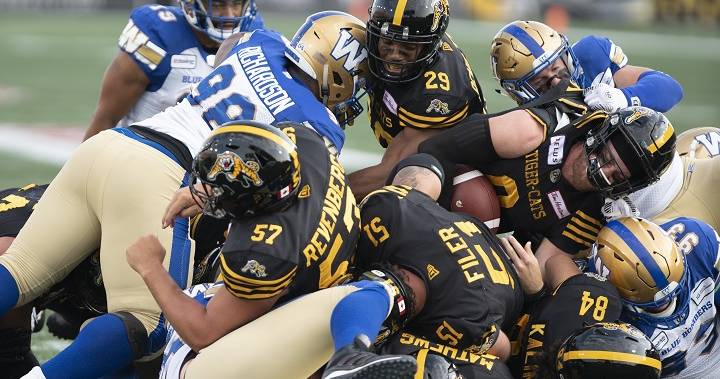 Jeremiah Masoli and Dane Evans scored rushing TDs as the Hamilton Tiger-Cats handed the Winnipeg Blue Bombers their first loss of the season, 23-15, in a battle of CFL division leaders Friday night.

But it was a costly win for Hamilton (5-1) as Masoli, the East Division’s outstanding player last season, suffered an apparent left knee injury in the first half. The Ticats were able to convert seven Winnipeg turnovers (three interceptions, three fumbles, one on downs) into 14 points in capturing their fourth straight home victory.

And Hamilton’s defence was disruptive without leading tackler Simoni Lawrence. The veteran linebacker served the first of a two-game suspension for hitting Saskatchewan’s Zach Collaros in the head in the season opener as Canadian Nick Shortill started in Lawrence’s place before a season-high Tim Hortons Field sellout of 23,512.

The rushing touchdowns were also the first allowed this season by Winnipeg (5-1). Quarterback Matt Nichols finished 29-of-48 passing for 261 yards with a TD and three interceptions after coming into the contest having thrown just one pick.

Winnipeg made it interesting with Justin Medlock’s 18-yard field goal at 12:11, cutting Hamilton’s lead to 23-15. The Bombers got the ball at their 17-yard line with 57 seconds remaining but turned the ball over on downs with Adrian Tracy’s sack of Nichols at the visitors’ 20-yard line with 19 seconds left.

Evans finished 13-of-25 passing for 94 yards with an interception.

It was also the first match-up between head coaches Mike O’Shea (Winnipeg) and Orlondo Steinauer (Hamilton). The two had spent 12 seasons together as teammates and assistant coaches with the Toronto Argonauts, winning Grey Cups as players (2004) and coaches (2012).

Medlock cut Hamilton’s lead to 20-12 with a 33-yard field goal at 7:02 of the third. It came after Hajrullahu connected from 27 yards at 7:02. That boot was set up by Mike Daly’s recovery of Kenneth Walker’s fumble on a punt return at the Winnipeg 22.

Maleek Irons had a two-point convert for Hamilton while Hajrullahu had two field goals.

Darvin Adams had Winnipeg’s touchdown. Medlock booted a convert and two field goals with the other points coming on a safety.

After surrendering the safety at 10:43 of the second, Hajrullahu hit a 21-yard field goal at 12:39 to give Hamilton its 17-9 half-time lead despite losing Masoli, whose left leg seemed to buckle beneath him on a first-down play.

Masoli walked off the field and was replaced by Evans. After heading to Hamilton’s dressing room, Masoli returned before the end of the half wearing shorts and a brace on his left knee, having
completed six-of-seven passes for 59 yards with an interception and rushing TD.

Masoli hit Irons on the two-point convert after Evans’ one-yard TD run at 6:03 of the first to put Hamilton ahead 14-0. Evans’ score was set up by Jumal Rolle’s 45-yard interception return.

Masoli opened the scoring with a 23-yard scoring run at 4:14. It was the first rushing TD allowed by Winnipeg and marked the first time in five games the Bombers had trailed.

It was a dismal start to the contest for Nichols, who’d completed his final 19 pass attempts last week versus Ottawa, a Winnipeg record. But Nichols’ streak ended with an incompletion on his first attempt before Rolle picked off Nichols’ second throw.