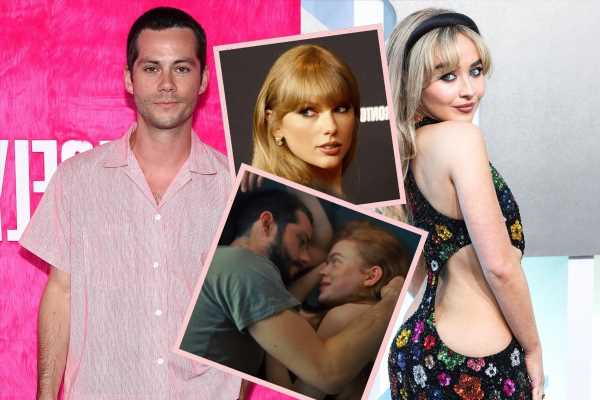 It’s a possible new couple alert! But is it a problematic new couple?

OK, so here’s the deal: Sabrina Carpenter and Dylan O’Brien have sparked dating rumors after being seen hanging out (and possibly making out depending on which sources you trust) in NYC over the weekend. Photos caught them together but didn’t capture any PDA; however, a source told Deux Moi they saw the stars “making out.”

Are they a thing? Maybe! Quite possibly! If you’re wondering, hey… what exactly is the, uh, age difference there? You aren’t alone!

Sabrina is 23, which is absolutely a fully grown adult… but also quite a bit younger than Dylan’s 31. It’s not outrageous, it’s not even outside the rule of half your age plus 7. But it’s also, innerestingly, just about the exact same age gap Jake Gyllenhaal had with Taylor Swift when they dated! (When they first got together Taylor had just turned 21 and Jake was 29.) Why do we bring that up in regards to Dylan?

Well, as you might recall, the Teen Wolf alum played the Jake stand-in in the short film version of Taylor’s All Too Well — the song about her relationship with the too-old-for-her movie star. In that video, Sadie Sink was cast in the Taylor role — while she was 19 during filming, she’s best known for playing a ninth grader in Stranger Things. So her youthful looks definitely highlighted the age difference there.

We weren’t the only ones to notice this feels a bit too much like life imitating art imitating life as the Maze Runner star seemingly goes after a significantly younger singer-songwriter. Fans on Twitter tweeted:

“Dylan O’Brien loves getting with the younger girls. His ex girlfriend is 23 and Sabrina Carpenter is too. Older guys date young girls because they’re easier to manipulate.”

“The girl he dated last year was younger”

This isn’t the first time Dylan O’Brien has flirted with controversy surrounding the age of girls he dated. In 2018 he was romantically linked to Chloë Grace Moretz, who was 21 at the time. He was 26. That also sounds fine sans context. But seven years earlier he said in a TV interview that he had “a crush” on her after seeing her in the movie Kick-Ass. She was only 14 at the time, and he was 19. He soon retracted the statement, clarifying he didn’t mean a crush crush. But then a few years later they did apparently date, so… yeah.

Obviously it’s possible Dylan and Sabrina are just friends, or even potentially working together. The make-out claim may have been mistaken. So could be this is much ado about no age gap whatsoever.

But what do YOU think about them as a couple, Perezcious readers? Totally kosher? Or a little sketchy??