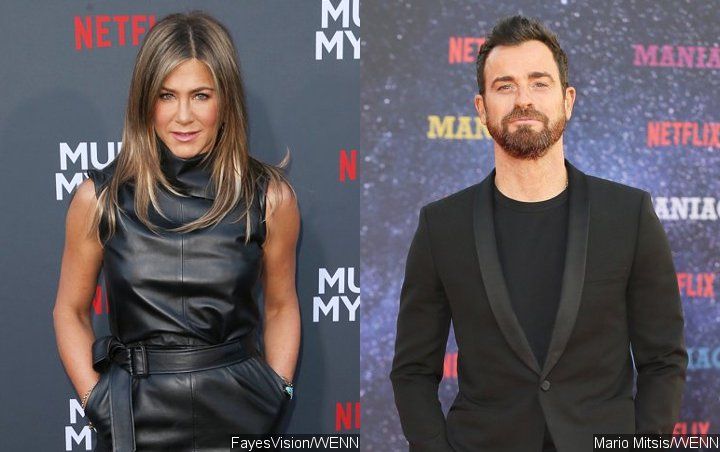 The former married couple reunites to mourn the loss of their beloved dog, which the ‘Murder Mystery’ star adopted in 2005 before she met the ‘Leftovers’ alum.

AceShowbiz -More than one year after their split, Jennifer Aniston and Justin Theroux are still there for each other in a grieving moment. The exes recently reunited to hold a beautiful ceremony and send off their beloved dog Dolly, who died at 14 years old.

The 47-year-old actor/writer took to his Instagram account on Sunday, July 28 to share photos of the heartbreaking funeral service. The white German Shepherd, which the “Friends” alum adopted in 2005, was laid on the grass and covered in flower petals, before being wrapped in a blanket.

While Justin and Jennifer’s faces are not seen in the photos, people assumed that the 50-year-old actress was there as one of the pictures showed two people holding hands over Dolly’s lifeless body. He also wrote “her entire family” in the caption, and Jen was clearly one of the closest family members to Dolly.

Justin wrote along with the pictures, “Tonight, at sunset, after a heroic struggle… our most loyal family member and protector, Dolly A. laid down her sword and shield. She was surrounded by her entire family.” He included a George Vest quote that read, “The one that never deserts, the one that never proves ungrateful… is the dog- faithful and true, even in death.” He concluded his post with, “Rest In Peace Dolly.”

The post was flooded with messages of condolences from fellow celebrities like Martha Hunt, Samantha Ronson, Damon Lindelof, Olivia Munn, Kate Walsh and Orlando Bloom. Whitney Cummings wrote, “Sending you all the love I have,” and Amy Sedaris added, “Awwww I’m so sorry Justin.”

Jennifer and Justin started dating in 2011 and got engaged in 2012. They tied the knot at their Bel Air mansion in August 2015. In February 2018, they announced that they had separated since the end of 2017. They, however, are not officially divorced yet.

Following their split, Justin moved to New York City, while Jennifer stayed in Los Angeles. They split the custody of their four dogs, with Dolly, a terrier named Clyde and a pit bull mix named Sophie staying with the “Cake” star and Justin taking a pit bull with him.