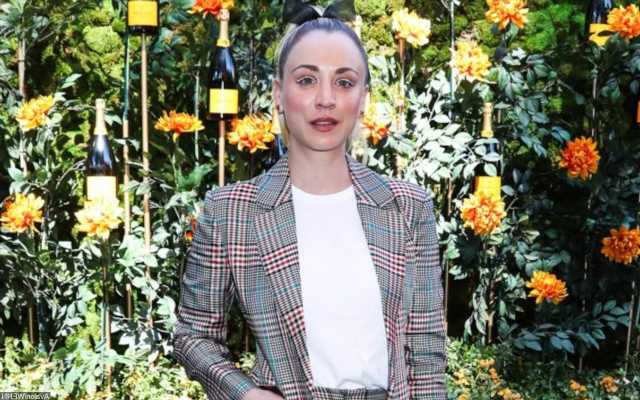 While filming several scenes for the series, ‘The Wedding Ringer’ actress is seen wearing a white button-up shirt that she tucked into a pair of slightly loose-fitting dark jeans.

AceShowbiz –Kaley Cuoco makes sure that she is able to keep work and personal life separate. A few weeks after filing for divorce from Karl Cook, “The Wedding Ringer” star was spotted in Los Angeles as she continued filming “The Flight Attendant“.

In photos obtained by Daily Mail, the 35-year-old actress was seen enjoying her working day on Monday, September 27. She was seen filming several scenes for the series before making her way around the production area while being accompanied by a production assistant.

While working on her series, Kaley opted to go casual. She could be seen wearing a white button-up shirt that she tucked into a pair of slightly loose-fitting dark jeans. To complete her look, “The Penthouse” actress added a pair of white sneakers that were contrasted by a set of crimson socks with white polka dots.

Kaley also wore a single necklace and kept a black crossbody purse slung over her left shoulder. The Primetime Emmy-nominated actress let her blonde hair free-flowing and cascaded onto her backside as she strolled around the set.

Kaley officially filed divorce paper earlier this month in the Los Angeles Superior Court. Upon learning the news, some people in their social circle were reportedly shocked. “In the beginning of the summer, Kaley seemed very happy with Karl. They were affectionate and seemed great,” a source claimed, adding, “The split seems very sudden. It’s pretty shocking.”

Prior to the divorce filing, Kaley and Karl, who started dating in 2016 and tied the knot in 2018, said in a joint statement to PEOPLE, “Despite a deep love and respect for one another, we have realized that our current paths have taken us in opposite directions.” The former couple continued, “We have both shared so much of our journey publicly so while we would prefer to keep this aspect of our personal life private.”

“We wanted to be forthcoming in our truth together. There is no anger or animosity, quite the contrary,” Kaley and Karl noted. They also pointed out that they “made this decision together through an immense amount of respect and consideration for one another.”