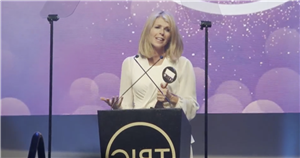 Kate Garraway made an emotional appearance as she was presented with a special award at the TRIC Awards on Wednesday 15 September.

Good Morning Britain star Kate, 54, picked up the gong for her continued incredible career over the past year, despite her husband Derek's ongoing battle with the effects of coronavirus.

As she picked up the special TRIC Award in a ceremony which is in partnership with OK!, Kate said: "I'm completely swept away by that, thank you so much."

Kate, who was handed the award by her GMB boss Emma, continued: "It has been a tough time, hasn't it? For all of us. But, people like Emma and people like Roman who is my colleague at Global and Smooth and so many people in the room, all the GMB team, have been absolutely amazing.

"It's helped get us through," she paused and added: "Gosh I'm lost for words."

Kate joked of the video montage which played as she was given the special award: "Am I actually fired because that was the most amazing montage. It feels like you just wrapped up 21 years.

"I've got to get a copy of that, if only for the hairstyles, the variety – the colour, the shortness, the longness!"

The GMB star added: "It's been tough for everybody and so many people have said today how amazing it is that television stayed on air, radio kept going and all the production teams and all those people involved and it's so true.

"But, it's not just those, it's all the rest of you in the room. It's the people that make the TVs, lay the cables, the people that sponsor the events – all of you keep going we're all in this amazing industry which I've always considered to be a huge honour to be part of to be able tell people's stories, help them to tell theirs, hold people to account and just generally be part of something extraordinary."

It comes amid her husband Derek's ongoing battle with the effects of the coronavirus.

Derek suffered serious complications after catching Covid-19 and became one of the longest surviving coronavirus inpatients in the country.

He suffered damage to his heart, lungs, kidneys and liver as well as brain inflammation.

As she won the award, the TV presenter broke down in tears on stage and paid tribute to her beloved husband, who continues to battle the effects of the disease every day.

She said: "Thank you so much for voting. I wonder if the reason why you did is because our story is your story.

"I think we have all been touched by the pandemic, whether it is livelihoods, mental health – all the other extraordinary documentaries that have been highlighted and nominated tonight, they have also been affected by the pandemic."

Kate later shared plans to create another documentary, this time focussing on her journey as a carer after Derek returned home from hospital earlier this year.

Speaking to OK! and other publications in the winners room after picking up the gong, Kate said: "There is a lot of challenges that we’re all facing now."

She added: "I am now experiencing being a carer, a 24 hour carer.

"And the challenges that are there – I think we all know social care has been in the headlines.

"And for lots of reasons, lots of people need support for getting health and social care that they need so there’s definitely more stories to tell."

Kate revealed her husband "understands everything" as she discussed his progress.

She told GMB viewers: "We are very clear now that he does understand everything really, and understands everything that I tell him about.

"He can’t respond still and communicate, and Derek’s been having lots more tests of things. We went to hospital a few weeks ago, (which was) the first time he’d seen medics outside of the home."

For all your updates on Kate Garraway and many more of your favourite stars, sign up to our daily OK! newsletter.