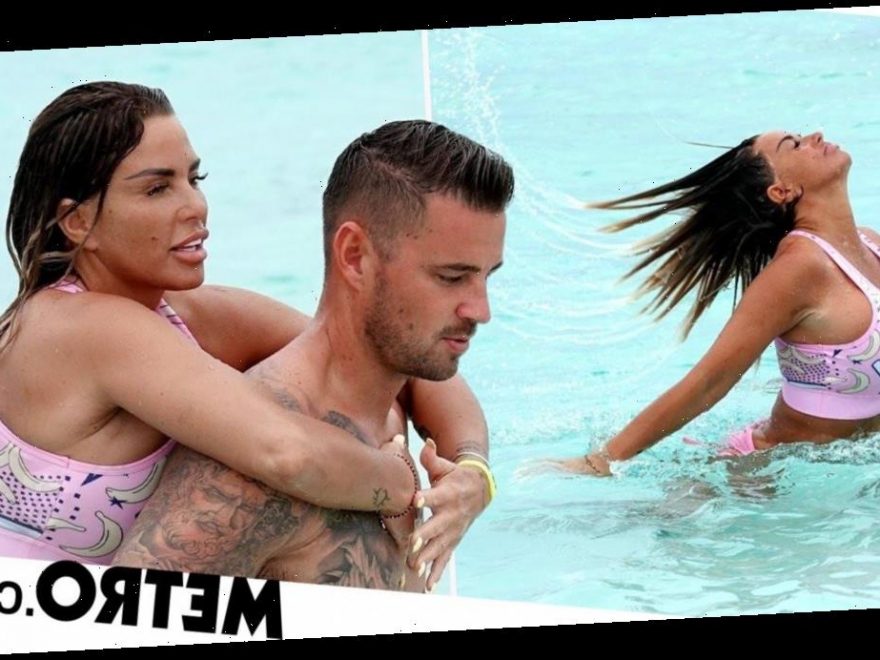 Katie Price and Carl Woods made the most of the end of their romantic holiday to the Maldives as the couple were seen enjoying the crystal-clear waters.

The couple had flown out on a ‘baby-making holiday’ after opening up about their plans to start a family together.

Katie, 42, and Carl, 31, were seen catching the last of the rays before they were due to fly back to the UK, with Katie being seen snapping photos on her phone on a sunlounger.

The former glamour model was also seen whipping her hair back in the water to create an impressive wave pattern, before being joined by her beau for a swim.

Carl was seen giving Katie a piggyback in the water, before she laid back in the waves while he held onto her legs.

The couple couldn’t keep their hands off each other, and sources have claimed Katie is convinced she might be expecting her sixth child after the holiday.

A source told The Sun: ‘After almost three weeks in the Maldives she’s convinced she’s pregnant – they’ve had a really romantic holiday and haven’t been able to keep their hands off each other.

‘They’ve had the best time and have loved every minute together – Katie can’t wait to take the test to see if she’s going to be a mum again.

‘She’s been so happy and relaxed in the Maldives and hopes the stress-free environment has helped her to fall pregnant.’

Katie recently revealed on her YouTube channel that the couple are ‘not being careful’, but took a pregnancy test to prove she wasn’t pregnant before they left.

She already has 18-year-old Harvey from her relationship with Dwight Yorke, Junior, 15, and Princess, 13, from her marriage to Peter Andre and Jett, seven, and Bunny, six, with ex-husband Kieran Hayler.

Though Katie and Carl have only been dating since the summer, the pair got serious quickly, and have even discussed getting married sooner rather than later.

While a pregnancy test might be the first thing on Katie’s agenda when she gets home, she is also due to have a scan on her broken feet to see when she will be allowed to walk again.

She has been in a wheelchair since July after breaking both her feet in a freak accident while on holiday in Turkey, which doctors had warned could take up to two years to heal, but she has impressed them with her fast recovery following major surgery.

MORE : Katie Price awaiting scan to find out when she can walk again but will never be pain-free after breaking both feet