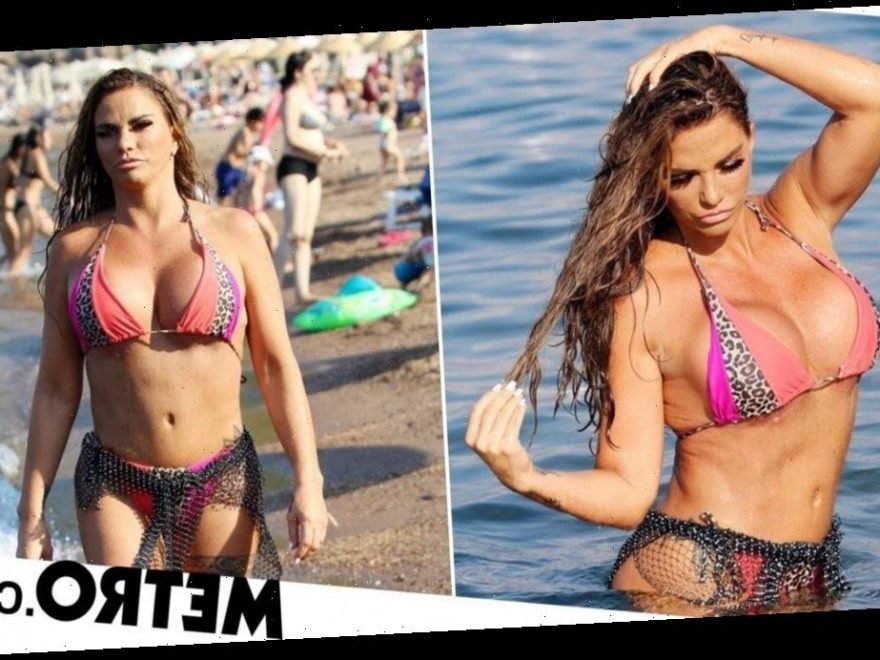 Katie Price has recovered from her recent surgery and she seriously looks like she’s feeling herself as she poses away in the sea.

The mum-of-five shrugged off all the recent drama surrounding her love life as she strode along a beach in Turkey in a pink and leopard print bikini.

She then went a step further as she waded into the sea before throwing up a model pose, with one hand on her head and the other tugging at her hair.

Safe to say, she seems pretty happy with the results.

The 41-year-old’s recent bout of surgery saw her undergo a facelift and a boob reduction, leaving her with some shocking wounds and scars.

And it seems life after the procedures wasn’t all dandy as her sex life with former beau Charles Drury reportedly suffered.

‘Her sex life is struggling, as her skin is extremely sensitive and her stitches can tear and weep easily,’ an insider claimed to Heat.

‘She wants to give Charles a good time, but she’s behaving like an old lady because she’s worried the stitches could come out.

‘She feels as though she’s coming apart at the seams.’

And her recent surgery also prompted some backlash from fellow stars – including Kerry Katona.

Kerry – who acted as Katie’s bridesmaid at her wedding to Peter Andre – admitted she was worried about her pal, saying she looked ‘weird’ after her facelift.

The 38-year-old wrote in her new! column: ‘I love Kate to bits but I think she’s crossed the line. ‘She’s beautiful but she’s clearly got terrible insecurities. She needs to be careful now.’

The former Atomic Kitten star added: ‘Her ears look really big. I imagine they’re swollen from where the face gets pulled up, but, that said, the last time I saw her they looked weird.’

Katie is no stranger to a cosmetic procedure, having had eight boob jobs, bum lifts, a nose job, two facelifts and regular Botox and fillers.