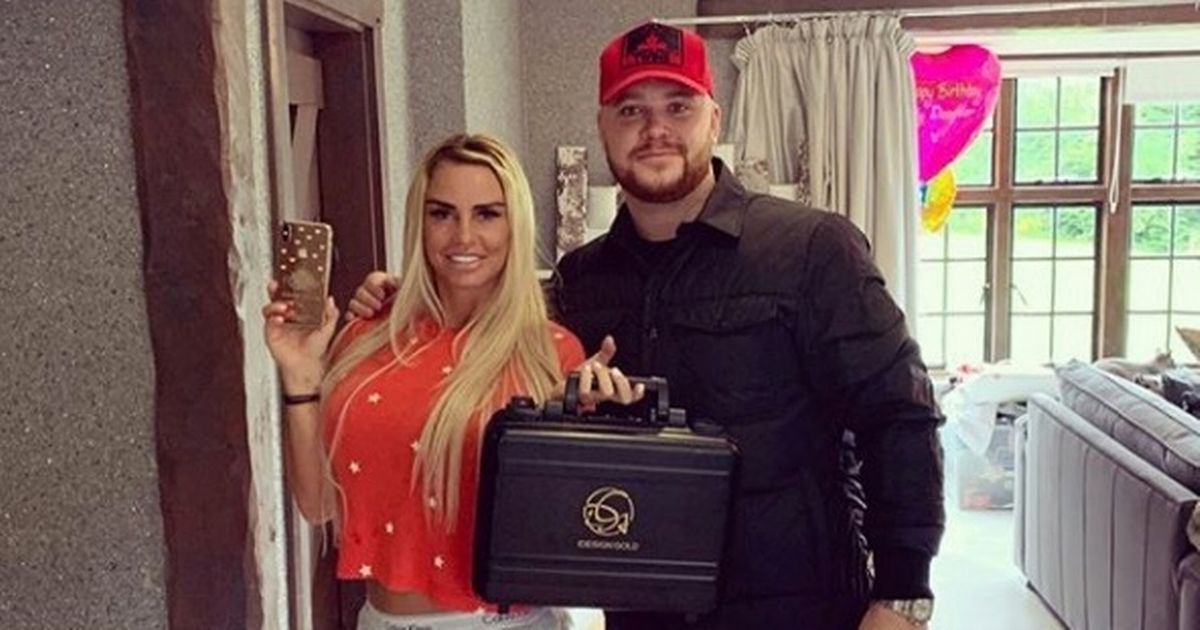 Katie Price has been flaunting an eye-wateringly expensive iPhone, despite rumours that her fortune is dwindling.

The mum-of-five was seen on the Instagram stories of luxury shop IDesign Gold where she was flogging the £3,500 phone, which has a 24K gold finish.

Her flashy new phone was seen branded with her name and sat on top of her bright Range Rover.

Katie then posed for a cheesy snap where she held the phone in one hand and a briefcase in the other as she posed with the man who delivered them.

She pulled a big grin as she donned a bright orange crop top and grey jogging bottoms in the photo.

She was facing financial ruin as her debts spiralled and even faced having to sell off her mucky mansion in West Sussex.

Katie has also been flogging her old clothes – even her knickers – as well as her former breast implants in a bid to raise some much-needed cash.

And her moneymaking schemes continued last week when she flogged her weird new swimwear range .

She's also been promoting hew single Hurricane, which she performed at a beach club in Spain earlier this month.

But the launch party didn't go to plan as she was caught miming and doing some dodgy mum dancing .

Katie has reportedly moved back into her mucky mansio n after giving it a £250,000 makeover.

She and her kids have been staying with her boyfriend Kris Boyson, 30, at his home in Kent recently.

They were living there while her house in West Sussex got cleaned up with renovations worth thousands.

Harvey, 17, Jett, five, and Bunny, four, were squeezing into Kris' house full time, with things becoming even more cramped when Junior, 13, and Princess, 11, come to stay.

The mansion, which had fallen into a state of disrepair, allegedly costs around £10,000 a month to maintain.