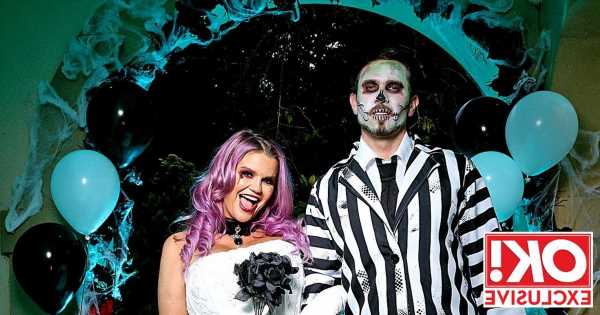 Kerry Katona has said that her fiancé Ryan Mahoney isn't "a marriage kind of guy" and admitted the coronavirus pandemic "threw a spanner in the works" when planning their upcoming wedding.

The 41 year old became engaged to 32 year old Ryan in August 2020, having to slam the brakes on planning their wedding due to the pandemic.

Taking part in a spooky Halloween themed shoot with new!, the former Atomic Kitten singer and her personal trainer partner have opened up on their plans to marry in Las Vegas.

In an exclusive video, Kerry said: "We’re in no rush, are we? It happens. I’ve got my dress, I’ve got my ring."

When Ryan adds: "We were keen for a bit of Vegas," Kerry continued: "That’s the only place that we will get married.

"Ryan's not really a marriage kind of guy anyway, are you? It wasn’t something you wanted to do and I’ve been married enough times."

The fitness fanatic replied: "I’ve always said it’s a bit overrated but it’s a nice thing to do to show your token of love or whatever it is."

Laughing, Kerry added: "I’ve run out of ways to do it so it’s going to have to be Vegas!"

"Vegas is going to be cool, it will be so good, it’ll be a laugh," Ryan replied.

Detailing their low-key wedding plans, Kerry said: "It’s just going to be me, Ryan and the children and if anybody else wants to come they make their own way. We were thinking about doing a drive through at one point.

"The fact we’ve been together over three years now and we’re not married and no babies," she said, with Ryan saying: "We’re setting records!"

Kerry recently opened up on how she is getting her eggs harvested in a bid to welcome a child with Ryan, which would be her sixth.

Speaking on Steph's Packed Lunch, she said: "He's eight years younger than me, but I don't want to rob Ryan of not having a child if that's a route we can go down. But I most certainly I don't want to carry another child."

Ryan said: "It might something down the line, a thought for me – Like I want something more than I do at the minute. At the minute we're so busy, it's not top of the list.

"But if it is going to happen, we've got to get the ball rolling and start the process."

For the latest updates on Kerry and her family, sign up to OK!'s daily newsletter.