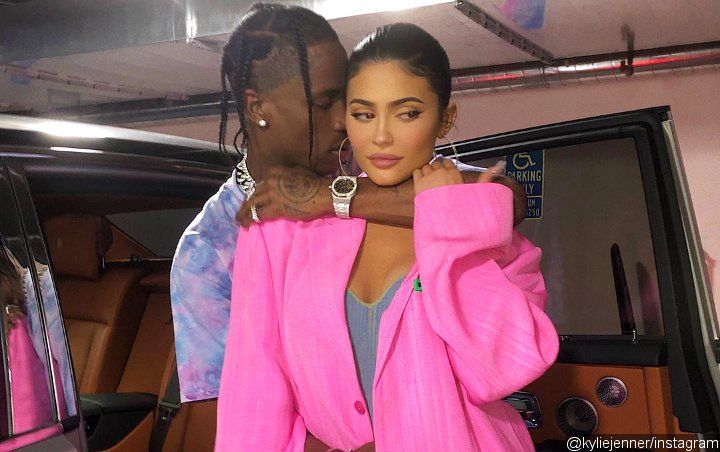 Responding to a photo of the couple with their car parked in a disability accessible parking spot, an Instagram user reminds them, ‘Karma has a way of making things equal.’

AceShowbiz –Kylie Jenner has just reunited with boyfriend Travis Scott (II) after her fun-filled holiday, but the two are already sparking outrage among social media users. This is all because of a photo that the makeup mogul posted on Instagram on Monday, July 22.

The image in question looked normal at first glance, featuring the “Sicko Mode” hitmaker snuggling to Kylie in what looked like to be a parking garage with the door of their car wide open. However, if you look closely enough, you could see that their vehicle was parked in a disability accessible parking spot, and that’s what made people seriously mad.

One person sarcastically asked, “Sooo, which one of y’all are handicap?” Someone else wasn’t even surprised as saying, “Parking in handicap spots. Real classy. Not surprising given who raised you.” A third commenter bashed them, “I believe you. It’s a crime to park in the handicap parking spot. I sure hope you are bragging because you’re parked there. Karma has a way of making things equal. I would not tempt fate.”

There was one who wondered whether it was just the angle, but another debunked it and said, “Yeah they are, but I think it’s because the are billionaires they can do whatever they want.” One other urged someone to file a “police report” for what they did, with another echoing the same sentiment. The user told Kylie to “please pay the $250 fine if you don’t mind.”

Kylie isn’t the first KarJenner sister who got in trouble for parking her car in a disabled spot. Last year, Kendall Jenner faced backlash for the same thing when her Ferrari was photographed parked in a disabled spot outside a Bel-Air restaurant. However, at the time, a rep for the model insisted that she did nothing wrong because the one who parked it was the valet. “Kendall ran and jumped in the car when she saw the paparazzi instead of waiting for valet to bring her car to her,” so the rep noted.