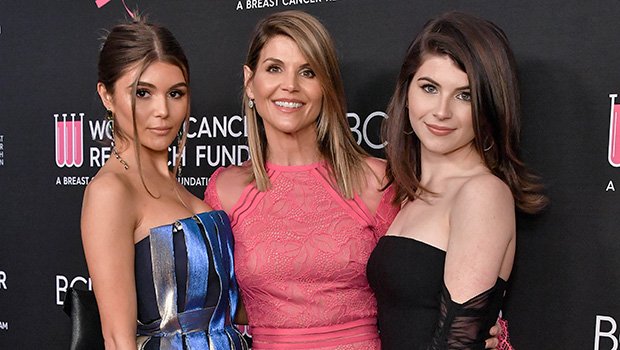 After going silent on social media in the wake of their parents’ involvement in the college admissions scandal, Lori Loughlin’s daughters broke their silence to wish the ex ‘Fuller House’ star a Happy Birthday!

“Happy Birthday, mama. I love you,” Bella Giannulli, 20, captioned an Instagram post (click here to see) featuring her and her mother, Lori Loughlin. The former Fuller House actress turned 55 on July 28, and the occasion caused both Bella and her sister, Olivia Jade, 19, to break their self-imposed social media silence. “My people [heart emoji],” Olivia commented on the pic after liking it, making this her first online statement in months. Both Bella and Olivia have practically vanished from social media after their parents – Lori and designer Mossimo Giannulli, 55 – were accused of paying $500k in bribes to get their daughters admitted into the University of Southern California.

Lori and Mossimo pleaded not guilty for their role in the nationwide college admissions cheating scandal. Initially, they were charged with conspiracy to commit mail fraud and honest services mail fraud. The couple was later hit with money laundering charges. The couple faces a 40-year maximum prison sentence and is due back in court on Aug. 27, according to Elle. The whole scandal has put a strain on their daughters, especially Olivia Jade. The former YouTube influencer deleted her Instagram in April 2019. “She feels that she has already been through enough embarrassment over this situation,” a source told HollywoodLife EXCLUSIVELY in April.

Olivia was “furious with her parents over this mess and terrified that she may be forced to testify.” Though it seems time has healed all wounds. She and her sister made a rare public appearance on June 20. The two of them were spotted picking up a few things at a CVS pharmacy. About a month earlier, they were seen having a girls’ night out at Boots Bellows in West Hollywood. Shortly after the CVS run, the two sisters were again seen celebrating the Fourth of July party in Malibu.

Lori herself has been a bit of a ghost since the scandal broke. She was spotted out and about for the first time in months on July 15. While dressed in an all-white ensemble (with a matching oversized, wide-brimmed hat and huge sunglasses) Lori had a lunch date with friends before going for a bit of grocery shopping. Lori and Mossimo are “confident that [their] lawyers will find some loophole or some mistake by the authorities.” However, a source EXCLUSIVELY told HollywoodLife that they’re “looking for a Hail Mary when it comes to their case.” After all, it would be horrible for Lori to spend her 56th birthday behind bars.