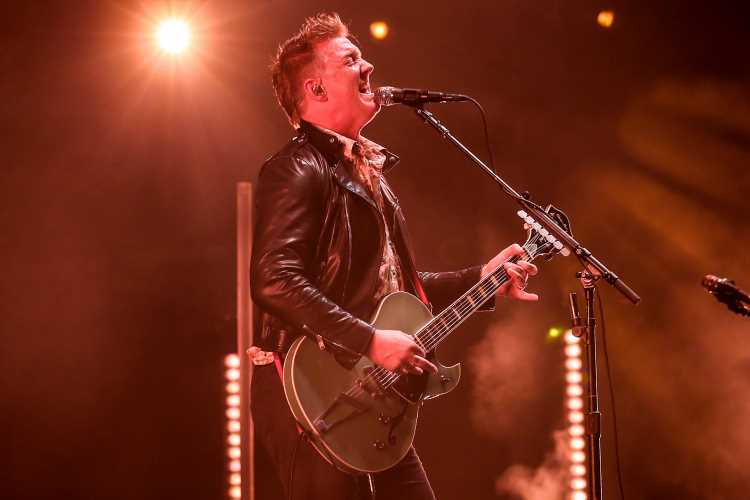 Queens of the Stone Age frontman Josh Homme made a surprise appearance at the Raconteurs’ Los Angeles performance Friday night, joining the band for an extended version of “Blue Veins.” Where the original track was only about four minutes on the Raconteurs’ debut, Broken Boy Soldiers, Homme and Jack White led the group into a nine-minute blues jam.

Fan-shot footage shows White digging deep into his lungs for the song’s huffy verses about “the blood running through your blue veins,” as Homme, dressed in black, lurks behind him. The two guitarists huddled together for the solo, practically making their instruments kiss, as they traded pentatonic licks. Meanwhile, Beastie Boys collaborator Money Mark held down the keyboards.

The footage is notable since Jack White bans the use of cell phones at his shows, requesting that fans zip them away in Yondr cases. Whoever captured the footage at the Raconteurs’ Greek Theater show likely tore open the sock-like case to access their phone.

White talked about how he loathed cell phones last year in an interview with Metallica drummer Lars Ulrich for the latter’s Apple Music show It’s Electric. “I really react to the crowd, just like a stand-up comedian would,” White told Ulrich. “If I finish a song and go, ‘Ta-da!’, and it’s crickets, I’m like, ‘Well, I don’t know what to do now.’ Am I supposed to play a heavier song, a faster song? Do you want me to play acoustic? Do you want me to leave? I’ll leave!’ But what I don’t like is, ‘Is that how they really feel, or are they just not even paying attention because they’re not engaged … because they’re texting?’ When you go to a movie theater, a symphony, church, whatever – there are all these moments in life where people put those away and engage.”