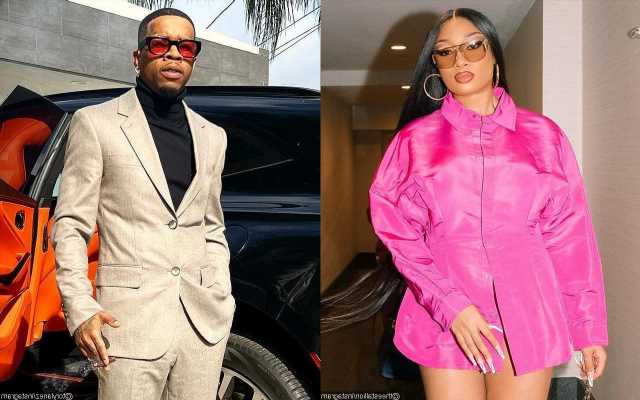 Prior to this, a call made by Tory to Meg’s former BFF Kelsey Nicole Harris while he’s in prison following the July 2020 shooting incident was leaked online.

AceShowbiz -More evidence shown to jurors in a felony assault trial against Tory Lanez over Megan Thee Stallion shooting have surfaced on the Internet. After 911 calls and a video of Meg crying in an ambulance following the incident made its round on social media, Meg received outpouring support from fans.

On Friday, December 30, two 911 calls made by neighbors in the area of Nicolas Canyon Rd. on the night the Hot Girl Meg was shot were leaked online. In the first audio, a man could be heard telling the operator, “We just heard gunshots next to my house.” The man further detailed that “somebody’s screaming outside,” adding that he thought “someone might be shot.” Later on, the man identified that the one who screamed was “a woman.”

A second audio heard a woman calling the emergency service after she heard the gunshots. “There’s a woman who sounds like she’s being hurt, it’s definitely a domestic disturbance of some kind,” said the woman. She then added that though she knew there had been “a lot of fireworks,” she was confident that she heard “gunshots.” She even assured the operator, “I do actually know what a gunshot sounds like.”

“I guarantee if your officer is just driving to Nichols Canyon, they’re gonna hear it,” the woman continued. She further said that she believes she heard “five” gunshots. “Immediately after that, as soon as that happened, there’s a kind of shouting…the woman was definitely louder. There was at least one male also and it [the altercation] continued for you know like a minute and a half or so. I think she’s being hurt and I need to call somebody,” explained the caller.

Also on Friday, YouTuber Nique at Nite, who previously shared the jail call Tory made to Meg’s former BFF Kelsey the morning after the shooting, publicized a video of Megan crying in the back of the ambulance following the incident.

The clip was derived from body-cam footage taken from one of the EMPs who treated the Houston rapper. The video saw Megan in tears and she could be heard crying throughout the duration.

A second video shared by Nique included audio of the moment the shots rang out. The sound bite was obtained from a nearby home’s security system. Five back-to-back shots could be heard clearly in the footage.

A third video leaked by Nique has audio from Kelsey’s September interview with the District Attorney, where she told prosecutors her side of the story, which included Tory threatening to shoot her during the argument in the SUV that sparked the shooting. She also admitted to seeing Tory shoot Megan. Kelsey recanted her statements in this interview while testifying during the trial despite being given immunity.

As for the jail call, Tory could be heard saying sorry multiple times and telling Kelsey that he was “so f**king drunk” the night of the incident. “I’m just deeply sorry,” Tory said in a sad tone, “But I never even moved like that.”

On December 23, Tory was found guilty of three felony charges. He’s currently facing more than 22 years in prison and the sentencing will be determined on January 27. In addition, there’s a “strong likelihood” the 30-year-old emcee will be deported back to his home country of Canada. His legal team is currently planning to appeal the decision.