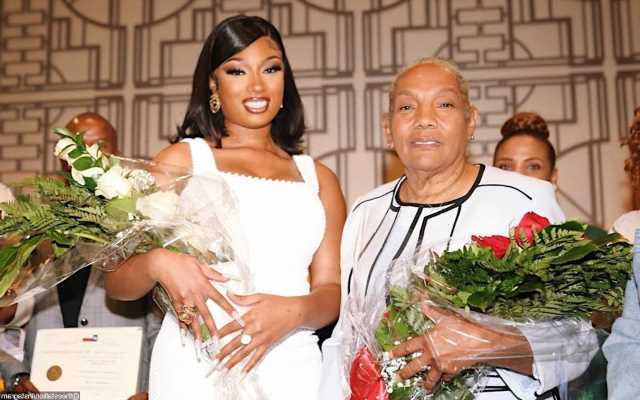 Aside from the recognition, the 27-year-old Grammy Award-winning entertainer was awarded her own special day by Mayor Sylvester Turner in a Sunday, May 1 ceremony.

AceShowbiz –Megan Thee Stallion will try her best to not disappoint people from Houston. Having been honored with a key to the city and her own day, the “WAP” hitmaker vowed to keep giving back to her community.

Making use of Instagram on Sunday, May 1, the 27-year-old shared some pictures from the ceremony. “Came home real quick to get THEE KEY TO THEE CITY and in honor of my mother and grandmother’s birthday MAY 2ND is officially MEGAN THEE STALLION DAY IN HOUSTON TX,” she began her caption.

Megan went on to express her gratitude Mayor Sylvester Turner. “thank you Mayor @sylvesterturner for honoring me today and I will continue to give back to the city that made me who I am today #htown,” she pointed out.

During the ceremony, the mayor said, “Megan Thee Stallion has an extraordinary entertainment career, but we wanted to honor her for what she does offstage to lift people’s lives in underserved communities.”

“She assisted people after the 2021 winter storm, during the pandemic, and helped those struggling with homelessness,” he further explained. “I look forward to watching her grow as an artist and humanitarian.”

Back in December 2021, Megan was awarded with the 18th Congressional District Humanitarian Award in Texas. Congresswoman Sheila Jackson Lee, who gave the award, said in a ceremony, “This award has not been given out often, or to many… That is why it remains a special part in our congressional district.”

“The district has almost 1 million people. When this award is given, it has that special promise and special history,” Sheila added. She also noted that the award aims to recognize outstanding public achievements by the people who live in the 18th Congressional district.

In her acceptance speech, Megan gushed, “Thank you so much. I’m so honored.” She went on to rave, “It’s my responsibility to take care of the city that took care of me. My grandma always taught me to be kind and giving. I learned that from her.”