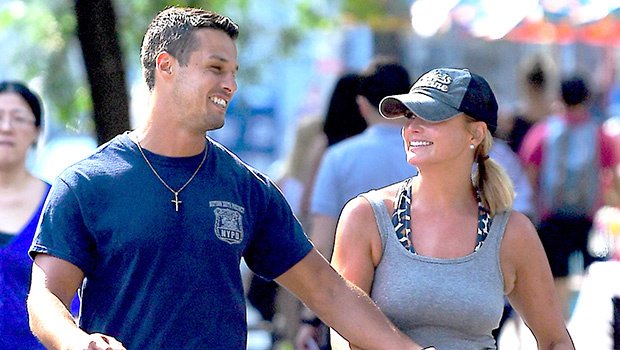 Miranda Lambert has turned the tables on her NYPD officer husband Brendan McLoughlin by making him grill southern fried chicken at her Nashville farm.

That’s more like it! After spending most of the summer in husband Brendan McLoughlin‘s native New York City, Miranda Lambert is making him fry chicken out of a cast iron skillet at her Tennessee farm outside Nashville. The 35-year-old country superstar shared a video to her Instagram on Aug. 4 where he’s seen flipping over buttermilk coated drumsticks like a pro. The hunky cop who is on leave from the NYPD shows off his muscled arms in a dark tank top while cooking over an outdoor stove.

“I’m sweet tea sippin’ on the front porch sittin’ while my hubby fries chicken and I’m pickin’ these straaangs,” Miranda captioned the video, adding “Live performance of my song “Locomotive” airs tonight on ABC at 8/7c. @CMA fest! #locomotive🍗🍺.”  It looks like she’s spending the day prior to hitting the stage having a relaxing Sunday funday at home, as her Airstream camper can be seen across her driveway in the background of the vid. Miranda also bragged “FYI The New Yorker took to the cast iron skillet just fine! #southern #Texan.”

Miranda also shared a boomerang video of herself holding up the finished product, writing “Buttermilk fried chicken y’all! Damn right!” over it. She’s looking fine in a pair of tiny Daisy Dukes, a black tank top and matching baseball cap. She’s got a pink bandana tied around her neck and her outdoor kitchen is sweeeeet! It’s got everything she could possibly want for cookouts, even on a hot sunny day as it features a wooden roof. She’s got a grill, oven, fridge, knife set, and even a cute patterned carpet on the floor.

Fans loved that Miranda was showing her New Yorker hubby the ways of the south. “I can’t wait! Glad your teaching your man how to make some good ol fried chicken!” a user named Cam wrote while woman named Summer commented “That’s what happiness looks like… fried chicken & a good lookin’ man! 😉.” A fan named Tracy told Miranda “I’m drooling over the chicken and the airstream♥️ and you guys are cutiepatooties😍” We can’t argue with that!