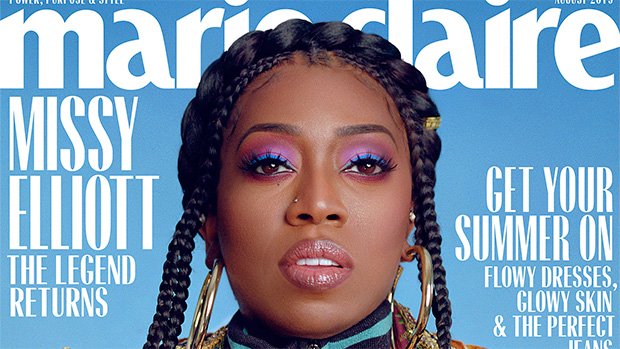 Hip-hop legend Missy ‘Misdemeanor’ Elliott has still got it! The rapper looked fierce as ever in her new cover story & even debuted a new, slimmed-down figure.

It’s out with the old and in with the new for Missy Elliott, 48. Not only does the rapper have a a new album on the way, but she’s sporting a dramatically slimmed-down bod as you can see in her latest cover story. The musician posed for Marie Claire’s July issue and wow — she looked incredible! The hip-hop living legend looked fierce in an array of eccentric outfits, with her cover photo being one of the most striking. Missy stunned in an orange Dolce & Gabbana coat and plaid pants, with accessories from both Jennifer Fisher and David Webb. The star has also noticeably shed some pounds and looked vibrant and healthy in each and every snapshot from her cover story!

Another photo saw Missy looking like the ultimate boss in a dramatic, over-sized fur coat with dollar bills printed across the front. She wore chunky white sneakers and flashy purple eye shadow. In one pic, she donned an eye-catching puffer coat from Versace and clearly — Missy came to SLAY in her cover shoot. The star has been a style icon for the entirety of her decades-long career, and her shoot proved she still holds the crown.

Missy also used her cover story as a platform to get honest about the impact she hopes to have on the industry. The 48-year-old rapper was sure to share a piece of advice for the next generation of musicians. “I do want to make the generation behind feel like, don’t be afraid, because we are in a time where so many people can be artists. … Now you can just post up, and if it gets to the right person, then it’s just viral. I want to be able to encourage those who don’t go viral… A lot of people that have 452 or 100 followers may be talented. I want them to not feel like they have to do what everybody else is doing to gain that attention. Just be you. It’s going to catch hold somewhere.”

Missy kept the good advice coming. “One thing I always say, you will always get respect, but you won’t be hot forever…You have to mentally be prepared for those ups and downs,” she said in her cover story. Check out Missy’s dramatic transformation above and be sure to keep your eyes peeled for new music from the female MC!