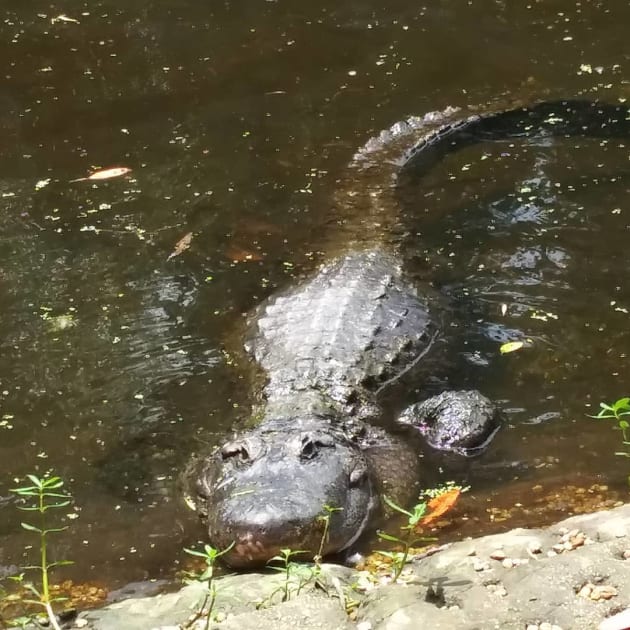 It looks like Crystal Methvin’s chickens have come home to roost. (We joke — despite her name, Ms. Methvin has no connection to this story)

But police in Tennessee are warning about how the public can prevent hoardes of methed up ‘gators from terrorizing the countryside.

Pro-tip: don’t dump your meth down the toilet.

The Loretta Police Department in Tennessee “attempting to flush methamphetamine along with several items of paraphernalia.”

“When you send something down the sewer pipe,” police remind people. “It ends up in our retention ponds.”

This is where it remains “for processing before it is sent down stream.”

“Our sewer guys take great pride in releasing water that is cleaner than what is in the creek,” law enforcement affirms.

“But,” the Loretta Police Department admits. “They are not really prepared for meth.”

What has investigators particularly concerned is how far downstream methamphetamines might pollute the water.

“it would create meth-gators in Shoal Creek and the Tennessee River down in North Alabama,” police fear.

“They’ve had enough methed up animals the past few weeks without our help,” the statement casually laments.

“So,” the police joke. “If you need to dispose of your drugs just give us a call.”

“And,” the department promises. “We will make sure they are disposed of in the proper way.”

First of all, very cute ending your PSA with a reminder that you’re not actually offering someone a solution that won’t involve their arrest.

Whoever was trying to dump a bunch of meth was probably just trying to hide it from the police in the first place.

But obviously, that wasn’t the eye-catching part of this bonkers story.

So casually, the police mention animals strung out on meth causing problems.

And then they mention meth-gators.

Around 2015, Syfy started producing actual genre content again instead of operating their business model on some wild dare.

But we have to guess that someone, somewhere is currently churning out a treatment for “Meth Gators” or something similar.

(Personally, I prefer Methigator — a longer word but it reads easily)

The idea of hordes of rampaging, meth-fueled gators frenzying through, say, a small town? I’d spend an afternoon daydrinking and watching that.

Throw in some other meth-frenzied animals as a bonus and you could have the set up for a whole new franchise.

On a less entertaining note, this story is a grim reminder of how much humans unwittingly dump into our environment every single day.

“Flushable” wipes should never be flushed. The same goes for condoms and hair. Oh, and for meth.

Scientists are only just now beginning to understand the role that microplastics are playing in the environment, but it’s nothing good.

We all have to live our lives, even if we sometimes cringe at the thought of our carbon footprints.

But the least that we can do is not deliberately introduce dangrous chemicals into the water.

I don’t actually know what a meth-crazed alligator would be like.

It would in part depend upon the dosage and the gator’s size. Alligators naturally have very slow metabolisms.

I did come across a case of a massive python that was not only dosed with but addicted to methamphetamines.

The drugs in its system, absorbed through its skin, made it more aggressive, confused, and erratic than normal.

So yeah, for the sake of whoever would have to run Gator Rehab, let’s avoid flushing meth.