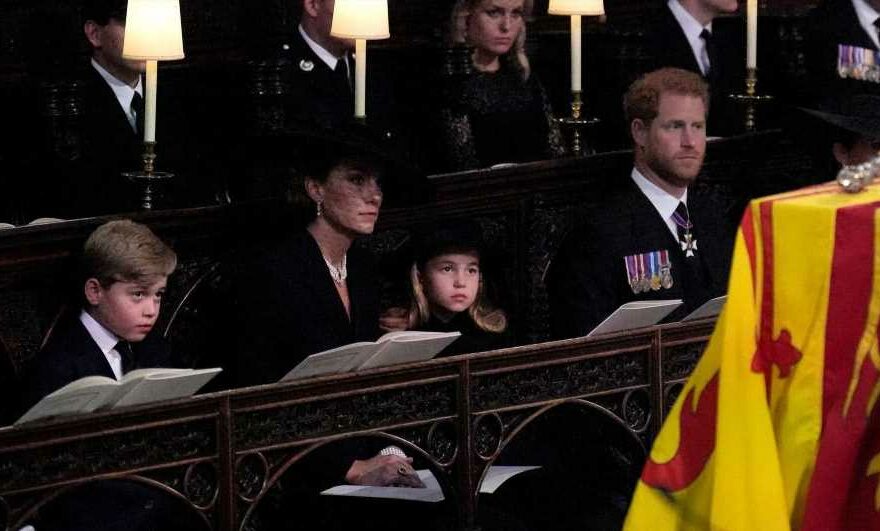 The royal family came together yesterday for the Queen’s funeral, where Prince Harry was publicly reunited with his niece and nephew, Prince George and Princess Charlotte. Harry was seated next to Princess Charlotte in a pew at St George’s Chapel in Windsor for the Queen’s committal service—and cameras caught them sharing a sweet moment where Charlotte saw her uncle looking her way and he gave her a reassuring smile.

A source told Us Weekly back in May that Prince Harry misses Kate and William’s kids “very much” and that “They’re extremely fond of him also. Charlotte will send everyone in the family thoughtful gifts and cards, and at the very least they’ll call as a family to sing happy birthdays and so on.”

The source also claimed that Charlotte in particular “very much” sees Harry as one of “her role models,” adding that she also “adores [Queen Elizabeth II] and her grandpa Charles dotes on her in a big way. They’re very proud of the person she’s developing into, just as they are with George and Louis.”

It’s unclear how much time Prince Harry and Meghan Markle have spent with Prince George, Princess Charlotte, and Prince Louis over the past week in England following the Queen’s death, but the couple have been seen at several events with the royal family honoring Her Majesty. There’s also been speculation among ~royal insiders~ that spending so much time together in shared grief will help heal tension in William and Harry’s relationship and put their feud to bed.