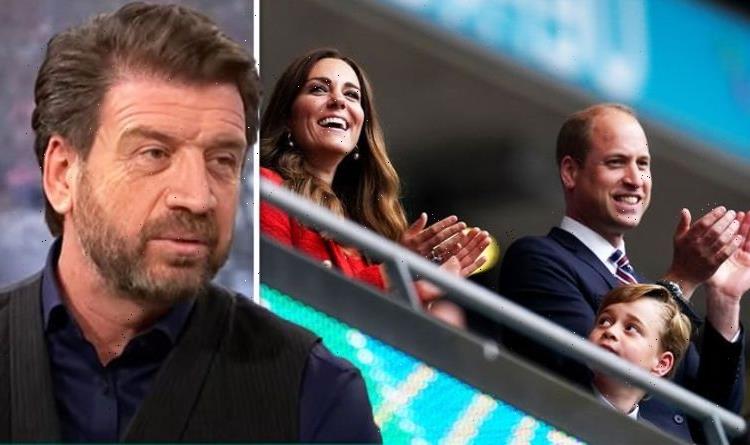 DIY SOS host Nick Knowles, 58, has taken to social media to defend the Royal family’s attendance at the final of the Euros 2020 ahead of Sunday’s game. Earlier in the week the media personality divided opinion after he controversially declared that celebrities should give their tickets to the England vs Italy final to people who “deserve” them.

In view of his 159,000 followers, the property expert branded the Royal family Britain’s “international representatives” and explained how he views it as different from the label of celebrity.

He wrote: “I don’t consider the Royal family celebrities – celebrity these days means anyone who has appeared on a reality show for two minutes.

“The Royals should be there as should the Prime Minister regardless of politics as they are our world representatives for an international showpiece,” he finished.

Fans of the I’m A Celebrity… Get Me Out Of Here! contestant took to the post to comment.

One wrote: “Completely agree!” as another chimed in, “Yes, they are our faces to the world, I [am] proud of our Royal Family.”

Earlier this week the DIY SOS star divided his followers after suggesting that celebrities with tickets for the finals of the Euros should donate their tickets to people who “can’t afford” them.

Nick wrote: “Maybe celebrities who have got hold of tickets to the Euro final might consider gifting it to someone who genuinely deserved it.

“Someone who doesn’t have connections, someone who can’t afford it – just a thought,”(sic) he wrote.

Presuming that the star hasn’t managed to get hold of tickets to the final, one social media user took issue with Nick’s tweet.

They wrote: “Why don’t they deserve them, just because they are famous they don’t genuinely deserve them… really???

“Is @MrNickKnowles upset that he hasn’t got the connections to get tickets?” they queried.

However, another agreed with the TV presenter and wrote: “Same with the tennis – perhaps Nurses Drs, paramedics, police etc wouldn’t mind a free ticket!” they penned.

“Fair enough the ones who have actually paid for them and sat in the stands with the real fans, but those who get the freebies to sit in the Royal box – those that could afford to buy loyal fans a couple of tickets,” commented another.

Upon spotting his post, one social media fan added that the royal family should also do the same.

They wrote: “Good idea @MrNickKnowles would love to see the royal family do this!” prompting the star to clarify his views on the monarchy as celebrities.

A keen football fan and head of the FA, Prince William is set to attend Sunday’s match at Wembley.

England are set to play Italy in the final of the Euro 2020 championship.

The match will take place at Wembley Stadium at 8pm on Sunday night and will be available to watch on both BBC and ITV.