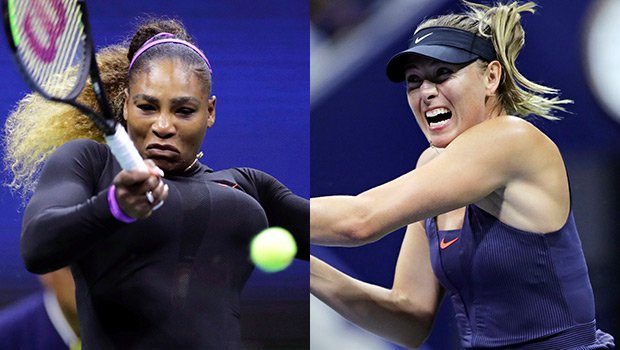 The memes were just as intense as Serena Williams’ match against Maria Sharapova at the U.S. Open on Aug. 26, where Serena dominated her tennis rival with a score of 6-1, 6-1.

Serena Williams, 37, didn’t waste any time in claiming a 6,1, 61 victory against Russia native Maria Sharapova, 32, on night one of the U.S. Open on Aug. 26. The tennis legend won the final five games of their first set in just 24 minutes, and clocked in a total of 54 minutes on the court inside New York’s Arthur Ashe Stadium. Serena’s win flashed before fans’ eyes, so they also didn’t hesitate to unload a flurry of tweets and memes in reaction to the match! “Serena must have a dinner reservation in NY she was trying to make. She was not messing around with Sharapova. 6-1, 6-1. #USOpen,” Good Morning America host T.J. Holmes tweeted. Another news personality, Gregory Lee Jr., took a cue from *NSYNC’s iconic song for his jab: “Ain’t no lie, Bye Bye Bye Maria as Serena kicked her butt in 59 minutes!”

The rest of Twitter was merciless, but oh so funny. “Clean up on aisle 1. Serena Williams dusts Maria Sharapova 6-1, 6-1 in the opening round,” journalist Josina Anderson tweeted. Many fans called for Serena and Maria to no longer be considered “rivals” after seeing the numbers on the scoreboard. “Serena Williams, Maria Sharapova and the words ‘Rival’ or ‘Rivalry’ don’t belong in the same sentence,” one such fan tweeted, while another wrote, “I’m willing to fight the next person who calls Maria Sharapova a ‘rival’ of Serena Williams.”

These fans weren’t just referring to the number ratio from the 2019 U.S. Open match. Serena has now beat Maria in a total of 19 games, and her win to loss ratio against Maria jumped up to 20-2 after Monday’s match. Serena also hasn’t lost to Maria since the Wimbledon Final in 2004. But it was this aforementioned win that prompted Maria to make a surprising claim in her 2017 autobiography, Unstoppable: My Life So Far, which only fueled the “rival” labels between her and Serena.

In Unstoppable: My Life So Far, Maria wrote that Serena let out “guttural sobs” in the locker room after their match at the Wimbledon finals. “I think Serena hated me for being the skinny kid who beat her, against all odds, at Wimbledon,” Maria wrote in the book, suggesting that’s the reason Serena has “owned” her over the past decade. In an even more shocking accusation, Maria wrote, “Not long after the tournament, I heard Serena told a friend – who then told me – ‘I will never lose to that little b**ch again’.”

Serena wasn’t too happy about this anecdote. “Well, yeah, I mean, you know, as a fan, I wanted to read the book and I was really excited for it to come out and I was really happy for her. And then the book was a lot about me. I was surprised about that, to be honest,” the tennis pro said in 2018, according to Metro. She added, “I think the book was 100% hearsay, at least all the stuff I read and the quotes that I read, which was a little bit disappointing.”