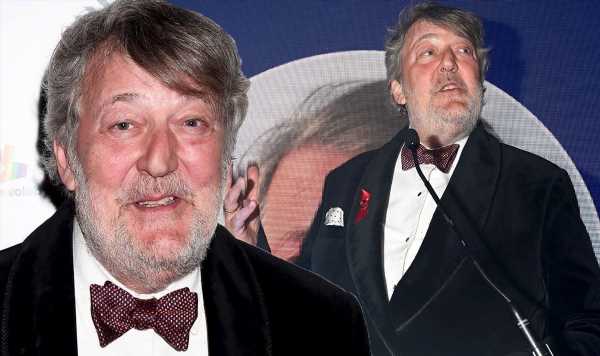 Stephen Fry, 65, discussed his severe mental health struggles and suicide attempts in a candid interview with Steven Bartlett on his Diary of a CEO podcast. The legendary actor spoke candidly about visiting the psychiatrist when he was only 14 and was prescribed medication.

The Blackadder star said: “My parents took me to a psychiatrist when I was 14. A very grand Harley Street office.

“Apparently the things I did and the way I behaved were typical of people from unsettled families.

“He prescribed me something. They recognised that there was a mental kink in me.”

Elsewhere in the conversation, Stephen spoke about the lowest time in his life, when he considered taking his own life.

Stephen said: “I just suddenly saw myself as in the wrong place, doing the wrong thing.

“I wanted to get away from everything I knew and really the first thing I wanted to do was take my life.”

Steven was stunned by Stephen’s raw admission mid-way through their interview.

Stephen went into further detail about the difficult time in his life and how he managed to overcome his struggles.

He later explored how manic depression can “shroud a mind” for a BBC series in 2006 called The Secret Life of the Manic Depressive.

Stephen said he started walking each morning in London and listening to or reading audiobooks to cope.

“It’s really been a slow process of allowing myself to be who I am and not to fight for my place at the table,” the writer explained.

“I am who I am and I don’t have to say yes to everything I am asked to do.”

Back in 2016, Stephen credited his husband, Elliot Spencer, with saving his life after falling madly in love and tying the knot the year before.

The national treasure gushed over his husband, who he credited for helping him get to “a great place”.

“My husband has saved my life,” Stephen told The Sun. “I think just the happiness and security and calm of being with him. I am in a great place right now.”

He added: “Rates of suicide and self-harm are terrifying through Britain. I hope and pray there will be less incidents.

“My physiologist Billy has been astonishing and the medication has also saved my life after finally getting it right.”

He also revealed he’s “much more at ease” with his medication, as he continues to overcome his personal struggles, but added: “I do have to take it every day.”

If you or someone you know has been affected by this story, Samaritans (116 123) operates a 24-hour service available every day of the year.

Alternatively, you can find more information on the Samaritans website here.