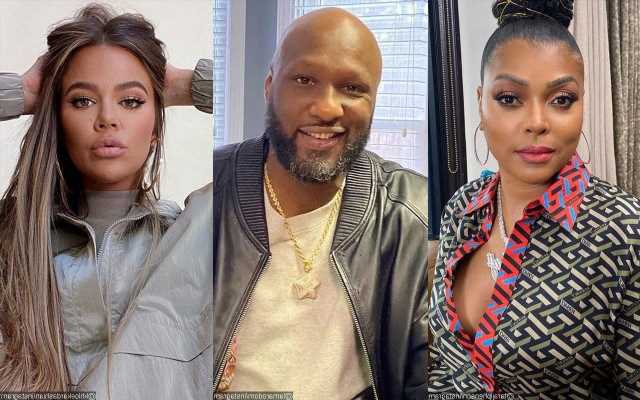 After the video is reposted online, people on the Internet are quick to judge the retired basketball player as he admits that he left the actress for Khloe Kardashian.

AceShowbiz –Taraji P. Henson found herself trending on Twitter for a rather uncomfortable reason. The “Hidden Figures” actress’ name was trending on Sunday, January 2 after footage of Lamar Odom shockingly revealing that left Taraji for Khloe Kardashian circulated online once again.

During his interview with TV One’s “Uncensored” back in 2019, the 42-year-old discussed the end of his and Taraji’s romance, which not a lot of fans knew about. The former athlete shared that before he started dating his ex-wife Khloe, he spent time with the actress.

“I met Taraji at [an] HBO party. I met her and we hit it off right away,” the retired NBA player explained. That was when he “really, really started liking her,” adding that he wishes he “would’ve done things [differently] with her.”

“She was a little older than me but I learned a lot from her because that was the most significant relationship as a grown-up that I had with a black woman,” Lamar gushed over the “Empire” actress. “I used to carry her picture on the road with me,” he added, referring to his time spent playing for teams like the Clippers and the Mavericks.

Not stopping there, Lamar claimed that Taraji was an inspiration for him. “She gave me inspiration… A black woman working like that, that’s just as good at her craft as I am in my craft,” he divulged.

As for why he ended things with Taraji, the Lakers star blamed himself, saying, “Things ended with Taraji because of me being an immature punk.” He continued, “I didn’t know how to tell her that I was falling in love with another woman named Khloe Kardashian.”

After the video was reposted by The Shade Room, people on the Internet were quick to judge Lamar. Having zero sympathy for him, one person tweeted, “Please learn to take your Ls in silence.” Someone else added, “Thank God. Taraji dodged a bullet cause tha man nth but problems.”

“wait Lamar was with taraji and cheated on her with khloe kardashian im sorry Tristan is karma for Khloe that lady was stealing everybody man!!” another person tweeted. Some others, meanwhile, were more baffled with the revelation regarding Taraji and Lamar’s past romance with one asking, “First of all, i never even knew Lamar and Taraji dated? Where i been.”