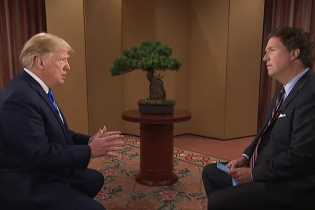 President Trump launched a new attack on the world’s internet and social media giants Monday, especially Twitter, alleging the company is stopping him from picking up new followers.

Trump accused Twitter of “possibly illegal” activity during an interview with Fox News host Tucker Carlson, although the president offered no proof to back up his claim.

The interview was about international affairs, but Carlson brought up the subject of internet giants, when he claimed Google is conspiring against Trump.

“Google, by some measures, the most powerful company in the world — all information flows through it — they’re against you,” Carlson stated. “They don’t want you re-elected. Can you get re-elected if Google is against you?”

[Watch the video below]

“If you look at Twitter, I have millions and millions of people on Twitter and it’s — you know, it’s a very good arm for me. It’s great social media. But they don’t treat me right,” Trump said. “And I know for a fact, I mean, a lot of people try and follow me and it’s very hard. I have so many people coming up that they say, ‘Sir, it’s so hard. They make it hard to follow.’ What they’re doing is wrong and possibly illegal. And a lot of things are being looked at right now.”

Trump may be upset with Twitter after the company said on June 27, it will begin labeling and demoting tweets from world leaders who violate its rules. The move appeared to be directed at Trump, who often attacks political rivals and even members of his own cabinet on the platform.