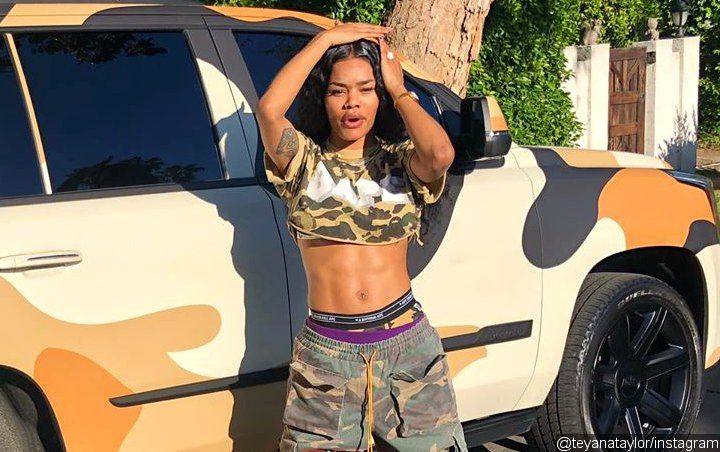 According to report, the ‘Gonna Love Me’ singer goes off after someone allegedly from Floyd Mayweather, Jr.’s TMT (The Money Team) disrespects and calls her out.

AceShowbiz -It looks like someone was trying to test Teyana Taylor‘s patience. The R&B singer was recently caught on camera confronting someone after he allegedly disrespecting her when she was visiting a basketball court just recently.

According to The Shade Room, Teyana was asking someone from Floyd Mayweather, Jr.‘s TMT (The Money Team) a simple question. However, he responded by disrespecting her and calling her out of her name, and that was when all hell broke loose. In a video that was filmed by a passerby, the “Gonna Love Me” singer was seen confronting the man. It was so intense that another man needed to come in between and seemingly tried to prevent a fight from happening.

It was unclear what Teyana said to the man in front of her, though it’s safe to say that it wasn’t something nice.

Teyana confirmed the report in the comment section of The Shade Room’s post, but she didn’t say whether the man is really from Floyd’s TMT. “A persons tone can be at level 1 but DISRESPECT can be at level 100. Trust & believe if I’m going off on someone it’s w/ very good reasoning. I will not tolerate any disrespect from anyone, idc who the hell he work for,” the “Madea’s Big Happy Family” star said.

Her celebrity friends have also weighed in on the video, with Snoop Dogg warning people, “She from Harlem. Don’t. Play with my niece.” Meanwhile, Lil Duval suggested, “That’s normal everyday Teyana.” Some others praised Teyana for standing up for herself. “You calm most of the time so I know you went off for a good reason. Ppl always want to disrespect women period,” one said, while another left several clapping hands emoji and added, “Never let these simpletons disrespect on any level.”

There was also one who wrote, “Amen/ 100% correct on what she did… Love you Teyana strong woman standing her around.” Someone else dubbed her “very talented and elegant.”