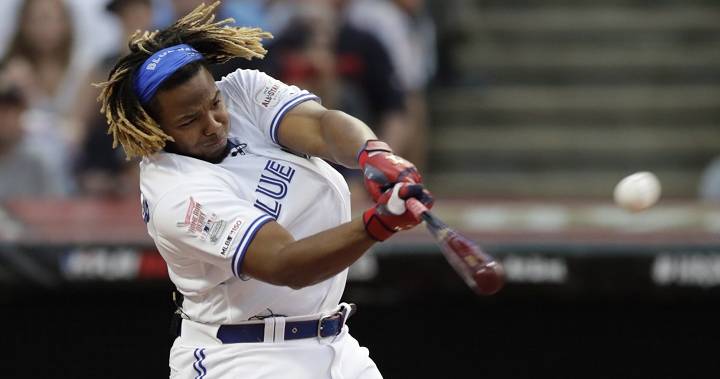 The 20-year-old smashed out 29 home runs in the opening round of the Derby on Monday night, breaking the old record of 28 set by Josh Hamilton in 2008.

Guerrero’s average home run distance was 421.5 feet, with an average exit velocity of 104.8 mph. His third bomb was estimated to go 476 feet.

Guerrero’s performance easily pushed him into the second round of the three-round event.

Hamilton, a five-time All-Star who was with the Texas Rangers in 2008, set the previous mark at Yankee Stadium but went on to lose the Derby to Canadian Justin Morneau.

Hours before Monday’s Derby, the Rangers tweeted a video clip of Hamilton’s record-setting performance with the caption: “Good luck beating this tonight, fellas.”

Guerrero was taking pitches on Monday from Jays coach John Schneider, who also threw batting practice to him for two years in the minor leagues.

Guerrero, the youngest participant in the event, was one of eight players teeing off in Cleveland for the Derby, which includes a $1 million top prize.

Guerrero’s Hall of Fame father, Vladimir Guerrero, won the Home Run Derby in 2007 while a member of the Angels.

He tweeted: “Big boy has power,” after watching his son set the record.