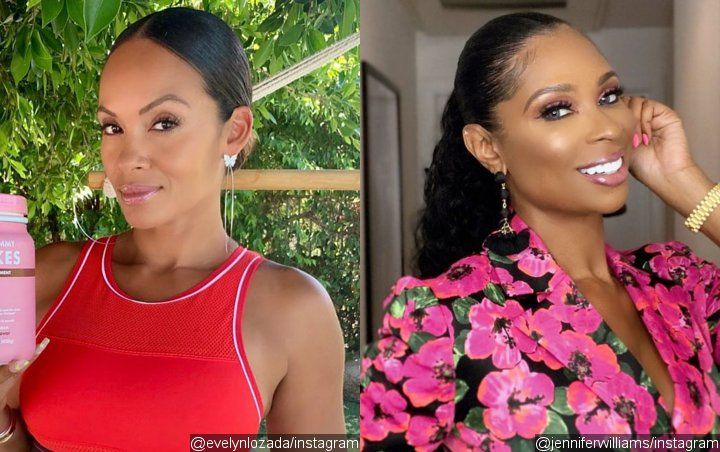 Even though the two ladies later apologize to each other following their fight, their feud is already back on with them throwing shades at each other on social media.

AceShowbiz –Evelyn Lozada clearly doesn’t have the best relationship with Jennifer Williams, and it just got worse after the latter made shady comments and accusation about her and her daughter. The 43-year-old star clearly has had enough and decided to confront her when they were having a gathering with the other “Basketball Wives” stars. As one would have expected, things escalated quickly.

In the latest episode of the VH1 show, Shaunie O’Neal tried to hash out their differences to no avail as Evelyn was apparently too offended after Jennifer called her daughter a “latch-key kid” and accused her of sleeping with Shaquille O’Neal. Clearly not having it, Evelyn threw her drink at Jennifer and yelled, “You were like my daughter’s aunt, you f***ing b***h! How f***ing dare you!…Do you know how she felt when she got home?”

Looking nonchalant, Jennifer casually left their gathering place as Evelyn continued to yell at her. The two ladies later apologized to each other during their San Diego trip, but when everyone thinks they have already made amend, their feud is back on.

Taking to Twitter, Evelyn wrote, “1 year of lying to my face, 1 year of lying to the press, 1 year of trying to make Shaunie and Malaysia look crazy all come to a head! All I ever wanted was the truth.” She added in another tweet, “At the end of the day I should have controlled my emotions towards Jen and her friend. I will ride for my baby until the end! She never deserved someone she considered an auntie talkie s**t about her for no reason.”

Jennifer later clapped back with her own tweet and accused her castmate of being a hypocrite. “It’s funny how people have selective memory!! SMH… You hit me with your purse, jumped on a table, tired to sell stories about me, set me up to get slapped and let’s not forget told the whole world about me sleeping with someone in Vegas. Please leave me TF alone about this BS,” she said.