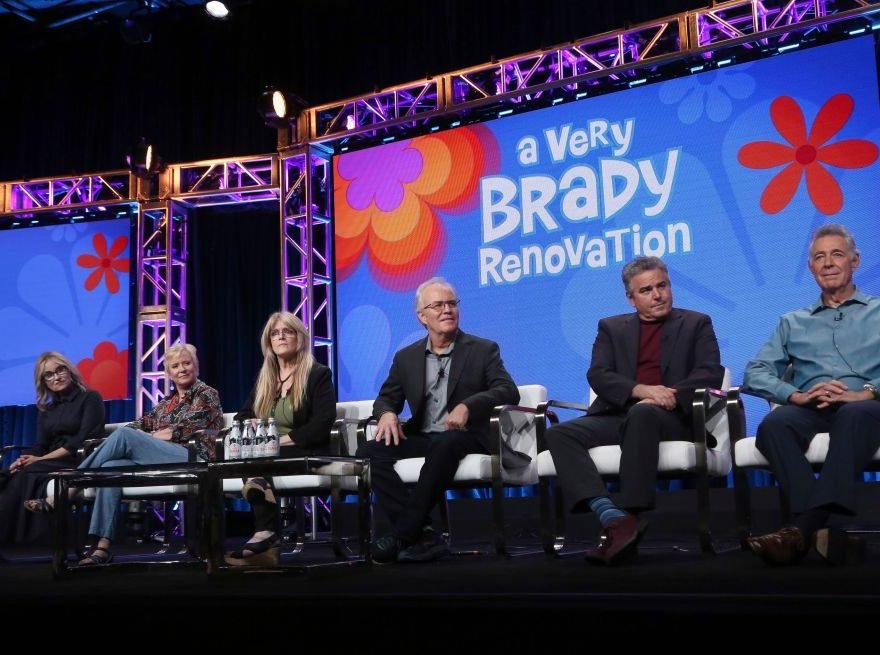 The beloved Brady 6 are back together after more than 15 years thanks to HGTV’s four-part series, A Very Brady Renovation. During the show’s presentation at the TCA press tour at the Beverly Hilton, The Brady Bunch alums Barry Williams (Greg), Maureen McCormick (Marcia), Christopher Knight (Peter), Eve Plumb (Jan), Mike Lookinland (Bobby) and Susan Olsen (Cindy) convened onstage to dish on the reunion.

Through the years, there have been a number of Brady revivals and reunions that have involved some of the original cast members, but for this one, it was important that everyone was involved.

“There are so many elements that had to come together to make this thing work. It’s almost unfathomable,” Williams said. “I love these people. We’ve had great relationships our entire lives but not all together at the same time. It was crucial to have every single person on this stage in that show. Very hard to do. Amazing that it was done. It had to do with each of us understanding that this was a project we wanted to lend our time to and our efforts towards.”

Added Plumb: “What resonated with me the most was that it was a different take on Brady. They weren’t asking us to come back and play Brady Bunch characters again. It was, ‘Let’s explore what the house will look like if we can make it in real life.”

The house they renovated was the one used for exterior shots in the 1969-74 ABC sitcom, which explains why none of them had a real connection to it. The group admitted to not even knowing the location of the home until much later after the show wrapped.

Still, there was “magic” in their renovation experience.

“I truly believe that when we first did the show it was one of those shows where everybody came together. It was an amazing experience. … It was a magical thing and it happened,” said McCormick. “I think this whole experience has been maybe one of the most magical since that where it all feels so good.”

Added Olsen: “This is the first time that the magic is back.”

The magic of remaking the house also brought along a connection to the late cast members. “We are the surviving members of the cast, and we can feel the presence of Robert Reed, Florence Henderson and Ann B. Davis in these rooms that are being created,” said Williams. “We can on the share their presence and what a significant part of our show they were.”

Now that the house is all done and is “almost a perfect replication.” according to Williams, what’s next? Nothing is set yet, but HGTV President Jane Latman did say that plans were in the works.

HGTV announced the reunion project in November, a few months after it purchased the Studio City house for way over market value and amid some mild controversy involving NSYNCH singer Lance Bass. HGTV teamed the original Brady kids with its own network stars to replicate the original TV set design