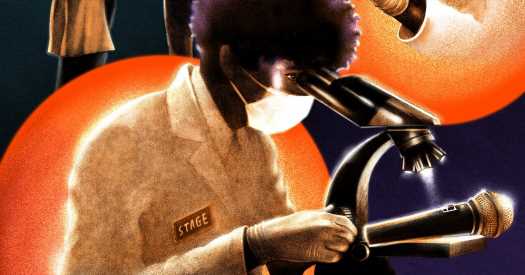 As live music revs back up, we spoke to five professionals around the industry about their experiences with fans, safety protocols, volume levels and tour plans. These are edited excerpts from the conversations.

Marguerite Nowacki, security supervisor at the Metro in Chicago

First and foremost, every patron needs two forms of ID: their government ID, and their proof of vaccination. Our venue does not allow any kind of negative test for entry. A lot of patrons have come up to thank us for actually checking every single person’s vaccination card.

That was the main reason we wanted to be fully vaccinated: We want people to feel our venue is a safe environment, and it will always be no matter what. Everybody’s been polite, understanding and accepting, with everything that’s going on. We’re seeing a lot of young crowds, and international crowds, and even the older generation is coming back out to listen to live music, and just be in the moment.

One of the new protocols is to look for anxiety or stress, and ask if a patron needs help. Being in your house, cooped up, and then finally being let out — a lot of people experience stress around high intensity music or light. We tell our team to look for irritation, shakiness, sweatiness. We give them a bottle of water and a towel, if they want, to calm them down. Sometimes they just want to go home.

Everybody still wants the best show, the biggest show, the flashiest show, the coolest show — whatever aligns with their thinking. Everyone has been sitting still for so long that we are now so busy, we’re almost turning down work. And as a result of that, we have to understand that all of the arenas and theaters everywhere are going to be booked solid. So there will be a time when we have to work out, “Well, if the routing means that you can’t get from here to here in time, and you can’t actually build the stage, then the stage has to become smaller.” We would then address that logistical constraint in our design while working with the promoters and agents.

The silver lining is that most management teams understand the constraints of availability, so they are talking to us earlier on than they might have in normal times. I think there’s something in the DNA of everyone that works in live touring, which is that we come up with solutions very, very quickly, which comes from the concept of “The doors will open at 7 p.m., and people will be in the venue.” But until we know where the problems are, we can’t really do much about it.

The logistics, we popped back into very easily — we have muscle memory, and it just reconnects. But I think what I’m seeing across the entire live entertainment industry is an enthusiasm and a joy that we’ve been really reconnected with. I was recently at Lollapalooza, talking to Tyler, the Creator and his manager, and I told them that it was an interesting experience to walk from the stage out to the front of the house, surrounded by the audience, and smell the beer and sweat. I used the analogy that it’s like bumping into an old friend you hadn’t seen for a long time. And I think Tyler just called me a hopeless romantic and wandered off giggling.

At first, it felt a little weird to have a bunch of people back in the room again. The first few shows, I was actually surprised that almost nobody in the audience was wearing a masks. I’ve just gotten so used to seeing people with masks over the last year and a half, that it almost sort of felt like culture shock.

We were actually pretty concerned that people would be on their worst behavior. But for the most part, everyone is very well behaved. Everybody’s excited to talk to the bartenders, and talk to us, because they’ve missed talking to people other than their friends and family for so long. There have been a lot of regulars coming back — I knew their faces before, and was sort of familiar with them, but everybody’s gotten closer, because nobody wants to take that social interaction for granted.

One of the nice things that actually makes my job a little bit easier on the technical side is that bands haven’t played in a really, really loud environment for a long time. They’re playing quieter than they once did, which brings the whole noise floor down onstage. Most of us are coming back with a fresh perspective after spending many months not working at all. When bands would load in, it used to feel like sort of a hassle — but now, whenever we have a band loaded, I’m excited for the running around, and lifting heavy things, and crazy things like that. It reminds me that we’re back at it.

Part of my job is to avoid surprises. It’s not about the noise, or the news, or the propaganda or whatever you want to believe or want to support. It’s about if anybody gets sick or not.

Everything’s affected, because as we go into a city you’re having to involve a lot of local workers at the venues. Some artists that have been touring regularly have slimmed down their production. Every tour is going to have their own restrictions or their own requests, but we are requesting that all locals staff be vaccinated, and that everybody wear masks throughout the day, vaccinated or not. It’s just taking every precaution — you’re trying to protect as much as you can, because you’ve got a lot of people traveling together in confined spaces, on your buses.

I think the biggest thing for everybody is that the access to backstage is going to be almost zero, in terms of anybody that’s not working. Any sort of visitation from anybody that’s not on the working personnel or touring staff, it’s probably just not going to happen. There’s no fluff, no extra people, not one guy that’s just out there to carry towels around.

I can’t speak for everybody, but I think the overall feeling is that the artists are excited to get back to what they love. If there’s any nervousness, it’s really about just being able to make it through the tour without there being an issue. In total, with opening acts, we’re about 85 people traveling together, and we’re having to interact with local workers daily in different cities every day. The goal is to not get anybody sick, because then it’s just a domino effect.

Mental health issues existed way before the pandemic, and continue to endure beyond it. We are seeing more requests come in daily, and we’re here to support them. A lot of the festivals and venues and bands are pivoting to require all of their crew and band members to be vaccinated. What we’re hearing is the anxiety increasing: Are they going to get it? How safe is it backstage? Are the venues adhering to protocols?

All of our directors, including myself, are licensed therapists, social workers and chemical dependency counselors. We can assess and get music industry professionals the resources that they may need — that can be directing them to a local therapist, finding therapists that do Zoom or FaceTime or Skype, making sure that they know where the local hospital is.

What we saw in the music community is how everyone began to confront mental health and talk about it and address it. For a long time, the music industry was behind in that, and now we’re seeing a lot of really good changes. Managers and agents are coming to us to say, “What can we do to help?” The more we talk about it, the more we destigmatize it, and the more that people will not be afraid, and not be shamed into thinking that they can’t get or find help.