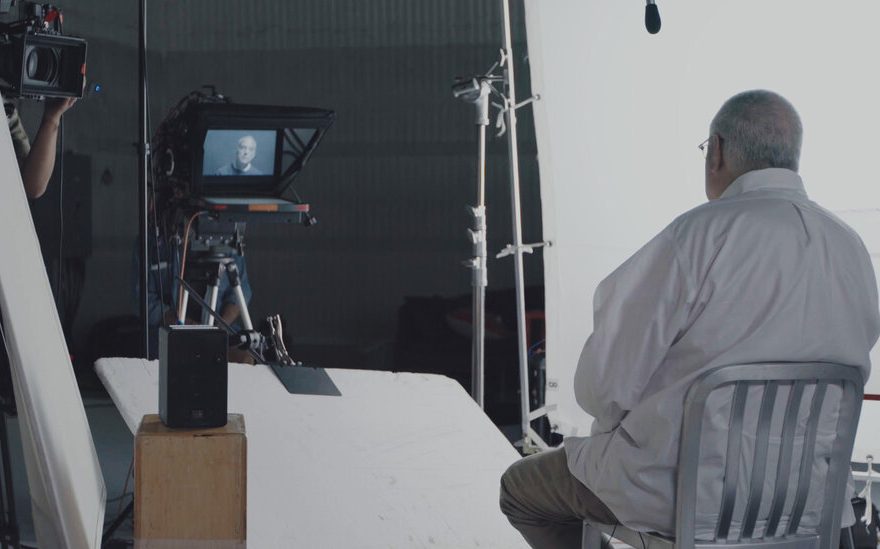 In the final episode of the new FX docu-series “A Wilderness of Error,” the influential documentarian Errol Morris steps onto the set of another filmmaker’s documentary. The disembodied head of that filmmaker, Marc Smerling, appears on a monitor in front of him — part of a rig called the Interrotron, which Morris developed in part to maintain the subject’s eye contact with the camera.

It’s how Morris grilled two former secretaries of defense (Robert McNamara in “The Fog of War,” Donald Rumsfeld in “The Unknown Known”), not to mention Holocaust deniers, a professional lion tamer and Steve Bannon. Morris scans the room with a quizzical expression.

“Am I directing here?” he asks.

And with that, one of the biggest true-crime rabbit holes of the past 50 years enters the hall of mirrors, if such a thing is spatially possible. On one level, Smerling’s series, a five-part true-crime documentary debuting Friday, is an adaptation of the 2012 book by Morris about the Jeffrey MacDonald case, which involves a Manson family-type massacre for which MacDonald, a Green Beret doctor, was convicted in 1979. But it also gives Morris the Morris treatment — a re-investigation by Smerling, who himself is known for producing bombshell documentaries like “Capturing the Friedmans” and “The Jinx.”

So now there are two versions of “Wilderness”: One is a book that questions MacDonald’s conviction for having killed his pregnant wife and two young daughters. The other is a docu-series that doesn’t seem to arrive at the same place.

“I believe Marc thinks Jeffrey is guilty,” Morris told me in a phone interview earlier this month. “Is that incorrect?”

“We’re not fully aligned,” Smerling had said in an interview two days earlier. “We are aligned on certain things, and we’re not aligned on other things.”

“Care to detail what some of those things are?” I asked.

“I think if I did that, Scott, I would give a lot away,” Smerling said. “I would be depriving the viewer of the experience of watching it, too.”

If Smerling and Morris have interpreted the same evidence somewhat differently, they aren’t the first. From the beginning, the MacDonald case has been a jumble of subplots, twists and meta-narratives. It has been the subject of countless media treatments, including other major books by high-profile journalists and a hit mini-series starring a young Gary Cole — each of which has helped shape the public’s understanding of a conviction that MacDonald, 76, continues to appeal from prison.

But as Morris puts it in the series, “What happens when a narrative takes the place of reality?” 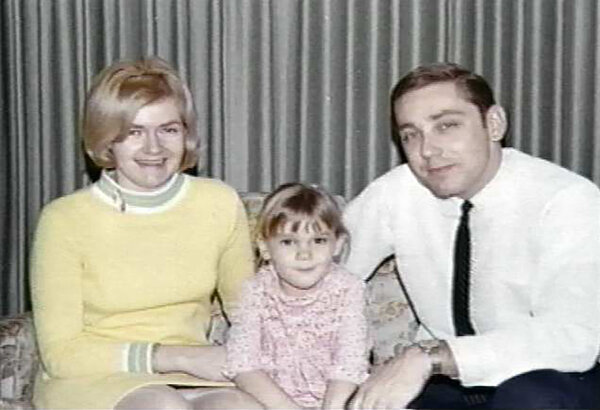 Certain facts are agreed upon. On Feb. 17, 1970, military police officers at Fort Bragg, N.C. were summoned to a grisly scene at the MacDonald residence at 544 Castle Drive. MacDonald’s pregnant wife, Colette, and their daughters, 5-year-old Kimberly and 2-year-old Kristen, were found brutally murdered in their respective bedrooms. MacDonald was discovered alive next to his wife with non-life-threatening wounds on his face and torso, a collapsed lung and a mild concussion. The word “PIG” was written in blood on the headboard of the couple’s bed.

MacDonald told investigators that four drug-crazed hippies had attacked his family — three men and a woman in a blonde wig and a floppy hat who carried a candle and chanted, “Acid is groovy, kill the pigs.” Charges against MacDonald were dismissed in an Army hearing. Nine years later, after Colette’s parents, Freddy and Mildred Kassab, grew convinced of his guilt and pushed for a criminal trial, he was convicted and sentenced to three consecutive life terms.

“It’s monstrous on either side,” said Bob Keeler, a reporter who worked the MacDonald beat at Newsday from 1973 to 1985, in a phone interview. He also appears in the documentary. “If he did it, he committed a terrible crime, and who could possibly explain it? And if he didn’t do it, the government railroaded a man who was totally innocent and lost his wife and children.”

In 1983, the writer Joe McGinniss (“The Selling of the President 1968”), who had befriended MacDonald and partnered with him on a book deal, famously turned against him in his true-crime best seller “Fatal Vision.” The next year, two of the three leads from “On the Waterfront,” Karl Malden and Eva Marie Saint, played MacDonald’s in-laws in an NBC mini-series adaptation, dramatizing the Kassabs’ conversion from MacDonald’s staunchest allies to the most fervent believers in his guilt.

Both versions of “Fatal Vision” were wildly popular, helping cement MacDonald’s guilt in the public mind. But McGinniss’s work had prompted ethical questions, which Janet Malcolm dissected in her provocative and influential 1989 book “The Journalist and the Murderer.” (Smerling has devoted an entire companion podcast, “Morally Indefensible,” to this fascinating subplot, though Malcolm did not agree to be interviewed for the series or the podcast.) The truth seemed more complicated than ever.

Writing “A Wilderness of Error” was Morris’s quixotic attempt to dislodge the case from public perception. Morris was friends with one of MacDonald’s attorneys, Harvey Silverglate, and Morris’s dissatisfaction with McGinniss’s and Malcolm’s books led him to 544 Castle Drive on Christmas morning, 1991. In poking through the evidence, Morris, a former private investigator, decided that the crime scene had been horribly managed and the criminal trial “rigged,” as he put it, courtesy of a “good ol’ boy network determined to secure a conviction no matter what.”

Morris shopped it as a film but couldn’t find a buyer, opting ultimately to write a book instead. Smerling was introduced to the book by Jason Blum, of the Blumhouse production company, who had worked with Smerling on the 2015 HBO true-crime series “The Jinx.” Known mostly for horror films, like “Insidious” and “Get Out,” Blum signed on as an executive producer with Smerling, who also directed.

Over five episodes, Smerling surveys an array of colorful characters, and he does it in the style of a Morris documentary: impeccable lighting, a lively score and extensive use of re-enactments to stage conflicting interpretations, as used in Morris’s landmark 1988 film, “The Thin Blue Line.” Many of the major players are not present — the Kassabs and others are dead, including potentially exculpating witnesses — but Smerling pores over the living witnesses and the evidence, as Morris did with his book.

(Notably absent is MacDonald, with whom Smerling said he had scheduled an interview that got abruptly canceled; an official at the federal prison in Cumberland, Md., where MacDonald is incarcerated declined interview requests for this article, citing coronavirus concerns.)

In the constant rehashing of these events, it’s easy to forget that real people were — and still are — affected by the case. MacDonald is still serving time. Colette’s brother, Bob Stevenson, agreed reluctantly to appear in the series, but the experience was visibly painful, his face often streaked with tears.

“Every year, somebody wants to throw a rope around my legs and drag me through the family pool of blood again,” says Stevenson, who declined to comment for this article, in Episode 1. “But I’ve come to understand that it’s not going to go away.”

It would be fair to expect the FX series to make a strong argument regarding MacDonald’s conviction, much as Morris did with “The Thin Blue Line,” which helped exonerate a man sentenced to death for the killing of a Dallas police officer. After all, “The Jinx” ended with an apparent live-mic murder confession from the real estate heir Robert Durst. (Durst was arrested and is still awaiting trial.)

“Wilderness” is not that kind of show. “Everything I’ve done has been an homage to Errol Morris,” Smerling said, but he sees it more like Akira Kurosawa’s “Rashomon,” drawing from a chorus of viewpoints on the same events.

“You’re telling these stories from different perspectives, and then these stories start to intercept with each other,” said Smerling. “And when they overlap, there are obvious inconsistencies and consistencies. Then you start to see, very clearly, where the line through the story is.”

In a sense, Morris sees the MacDonald case the same way, only he believes that those different perspectives are all unreliable narrators — himself included. Years after his book was published, he acknowledges in the series that he still believes MacDonald is innocent but knows he can’t absolutely prove it.

“I think this case, among other things, is a wilderness of unreliable narrators,” Morris told me. “On absolutely all sides. It’s almost like a primer on the nature of specious narration.”

For both men, “A Wilderness of Error” is, in the end, a story of uncertainty — as Morris says in the series, “Never convince yourself you know something that you don’t.” I asked Morris what it was like to be on the other side of the Interrotron, where certitude has a history of crumbling.

“I can’t control it,” he said. “I’m not the director. I feel that Marc really wanted me to say that this experience had changed my views about the case, but I don’t believe that they had or have.”

“The case is for me a quandary and remains a quandary,” he added. “There’s a reason I called it ‘A Wilderness of Error.’”