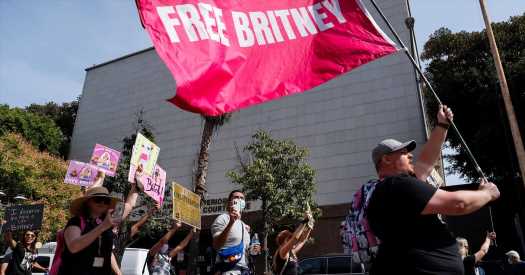 LOS ANGELES — More than 50 members of the media took their seats Wednesday afternoon in Courtroom 217 of the Stanley Mosk Courthouse here, all agreeing to abide by restrictions set by the court to govern a highly anticipated hearing regarding the conservatorship that controls Britney Spears’s life.

No laptops in the courtroom. No phones visible during the proceedings. No attempts in real time to communicate with others outside the courtroom. Violators would be swiftly ejected.

For those anxious to witness and understand whether Ms. Spears’s father would be removed as her conservator, as the singer had asked, it appeared the afternoon would be a frustratingly long wait to hear what had happened inside.

But, then, just minutes after the Los Angeles Superior Court clerk finished his roll call, snippets, seemingly from inside the room, began trickling out on the @BritneyLawArmy Twitter account.

For the next hour, the Twitter feed became a source of real-time information during the pivotal hearing, tracked both by mystified media outlets unable to talk to their own reporters inside and hundreds of Free Britney fans outside.

How did they manage to pull it off?

In interviews Thursday, members of the Britney Law Army described how the group, five friends all committed to seeing Ms. Spears enjoy freedom, plotted their judicial Ocean’s 11: a well-orchestrated “buddy system” that allowed them to disseminate as much information as quickly as possible without running afoul of the court’s very strict rules.

“It definitely would not have worked without all five of us,” said Marilyn Shrewsbury, 32, a lawyer who focuses on civil rights cases in Louisville, Ky.

The army, consisting of Ms. Shrewsbury; two other lawyers, Angela Rojas, 30, and Samuel Nicholson, 30; a legal assistant, Raven Koontz, 23; and Emily Lagarenne, a 34-year-old recruiting consultant, all from in and about Louisville, had flown into Los Angeles on Tuesday. That evening they sat outside, planning final logistics as they ate street tacos, drank beer and chain smoked.

“We are from Kentucky,” Ms. Shrewsbury said.

All four women identify as lifelong Britney fans, but Mr. Nicholson was the driving force.

The New York Times documentary “Framing Britney Spears” galvanized the group to rectify what they saw as a lack of consistent information available to the public about what they described as Ms. Spears’s “horrific treatment” inside the conservatorship.

On Wednesday, they arrived at the entrance to the courtroom at 7:30 a.m. in hopes of securing five of the 11 seats allotted to members of the public on a first come first served basis. Another 54 seats had been reserved for members of the media. Only one person, a New York Times reporter, arrived before them.

At 11 a.m. they were given red raffle tickets that ensured them spots in the courtroom when the hearing began at 1:30 p.m. Members of the public were told they would have to turn off their phones in front of deputies from the Los Angeles County Sheriff’s Department and then put them in magnetic locked bags, which could be opened when they left.

“I’ve never been so nervous for a court hearing I wasn’t an attorney on,” Mr. Nicholson said.

The plan: Each of the five would take copious notes, leave the hearing one at a time, in 15-minute intervals, get their phones out of the bags and tweet out as much as possible, as quickly as possible.

“We were in the worst spot in the courtroom,” Mr. Nicholson recalled. “Far right corner, not anywhere near the aisle at all. The clerk obscured our view.”

Some of them couldn’t see the judge or the screen for remote appearances. It didn’t matter. The doors closed, and the plan went into action.

Mr. Nicholson, measuring time on his watch, cued the others one at a time to run out of the courtroom. Information flowed, and followers hung on every word.

After an hour or so, Mr. Nicholson was the only Army member in the room. Judge Brenda Penny announced her ruling: Mr. Spears would be suspended as conservator of the estate, effective immediately. Reporters tried to leave the room to report the news to the outside world, but Judge Penny stopped them, saying she would let everyone out for a recess shortly.

Mr. Nicholson couldn’t leave either. His phone stayed locked up. The feed went dark. Out on the street, over one hundred #FreeBritney protesters waited in near silence. Ms. Shrewsbury and Ms. Rojas joined Ms. Koontz and Ms. Lagarenne outside.

When Judge Penny released the courtroom, the tweets started flying.

“Judge Penny: My order suspending Jamie Spears shall remain in full force and effect until a hearing on removal,” Mr. Nicholson wrote.

The other four members of the Army were with the crowd as it erupted.

“Literally the moment Sam tweeted Jamie was suspended, everyone started screaming about it,” Ms. Shrewsbury said. “We were in shock for a full 45 seconds.”