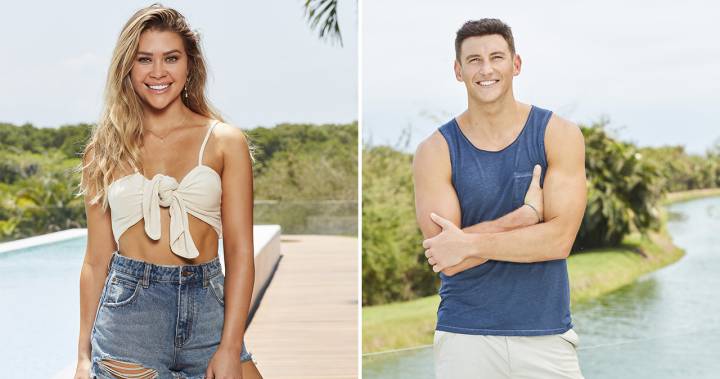 Bachelor in Paradise’s Blake Horstmann is attempting to prove he isn’t who Bachelor Nation is making him out to be after the show’s latest episode revealed a love triangle between himself, Caelynn Miller-Keyes and Kristina Schulman.

Horstmann, 30, took to Instagram on Tuesday to apologize for having sex with Miller-Keyes and Schulman on different nights at this year’s Stagecoach country music festival in April, which takes place over the course of three days.

Upon entering the villa, Miller-Keyes, 24, opened up to host Chris Harrison about her fling with Horstmann and accused him of ghosting her.

She said she didn’t reveal the information to the other women in the villa because she alleged Horstmann had sworn her to secrecy.

After the episode aired, Horstmann shared text messages that were allegedly sent between him and Miller-Keyes during their time at the three-day music festival in order to refute her claims.

Horstmann released screenshots of the text messages on social media because he “wanted to take time to address what is being portrayed in the episodes.”

“I made a lot of mistakes this past year that I’m not proud of. I know some people don’t think this show is real, but it is. It is very real,” Horstmann wrote.

“Everybody handles heartbreak differently and everybody handles the public eye differently,” he continued. “I have a lot of insecurities I’ve been struggling with and lost myself this year. I’ve gotten way in over my head with women and have made a lot of mistakes and, although never my intent, I hurt several people along the way.

“I take full responsibility for my actions at Stagecoach and will forever regret the decision I made that weekend.”

The Colorado native continued: “The women involved did not deserve that. I realize now that I hurt these women and I deeply regret that. I’ve done a lot of self-reflection since and have learned a lot from my mistakes.”

Horstmann said his intentions were “to get the truth out.”

“I was not able to defend myself down Paradise because me and most of the beach had no idea the things Caelynn was saying in her interviews.”

Horstmann went on to deny Miller-Keyes’ claims about them being in a relationship.

“I NEVER ‘sweet talked’ her at Stagecoach. Caelynn and I were NEVER in a relationship. I NEVER ghosted Caelynn, I NEVER called her a mistake and I absolutely NEVER EVER EVER silenced Caelynn,” he wrote.

Horstmann said he “never expected to have to do something like this, but after finally seeing the episodes, I feel like I have no other choice but to release the text exchanges between her and myself.”

In a series of screenshots, it appears Horstmann told Miller-Keyes not to come over during the Stagecoach music festival, to which she allegedly responded: “Dude. It’s fine. Chill it’ll be good. Come on, loosen up. Let’s just have a good time, man.”

She then allegedly wrote: “I just ordered an Uber.”

“We can cuddle but no sex lol,” Horstmann wrote, to which Miller-Keyes allegedly responded: “Yes sex. Only sex. No cuddling.”

The text message exchange later reads: “If I come over, it’s strictly for sex. Nothing more, nothing less. I’m just trying to be honest.”

Horstmann also shared a text message exchange that allegedly happened between the pair one week before filming Bachelor in Paradise.

“Dude, I’m freaking out,” Miller-Keyes allegedly texted Horstmann, who also admitted that he was scared and thinking about pulling out of filming the show.

The pair appears to discuss an unspecified event that worries both of them.

“We f—ed up so bad,” Horstmann wrote.

“If we play it off as not being a big deal, then it’s not. Everyone hooks up in this world,” the response reads.

Another text message appears to show Horstmann checking in on Miller-Keyes.

“How you doing? Just wanted to check in,” he wrote.

Horstmann has since deleted the screenshots from his Instagram Stories.

The Bachelorette alum asked his followers to “please stop attacking” Miller-Keyes for sharing her side of the story on Bachelor in Paradise.

“I am going to delete the text messages. I never wanted Caelynn to get attacked like this. Please stop attacking her,” he wrote.

As of this writing, Miller-Keyes has not responded to Horstmann’s posting of the text messages.