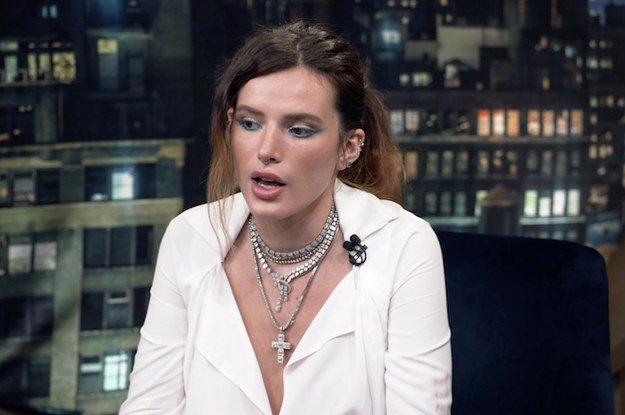 With the release of her new poetry book, “The Life of a Wannabe Mogul: A Mental Disarray,” Bella Thorne is sharing her innermost thoughts and chronicles her experience with childhood, love, and public perception.

In an interview with Buzzfeed News’ Profile, the singer and actress described her journey to becoming a poet as “therapeutic” and “cathartic.”

In the novel, Thorne shares her experience dealing with depression and anxiety. She spoke candidly about the accidental death of her father, and the role that has played as a muse for her writing.

“You know, I think a lot of people think that if you’re going to write about your dead father you’re probably going to say, like, a lot of really great things and such, and what I like about all this stuff that I’d written is like, no one’s parents are perfect on either side,” she stated. “It’s good to have in there because he doesn’t get to be a hero just because he’s dead.”

Accompanying the book is a vinyl audiobook, produced by Thorne’s former lover, rock musician Mod Sun. The combination of both music and writing was intentional to showcase Thorne’s growth as a person, she said.

“I’ve specifically dated things so that you know that that’s what I thought, and I grew and I changed and my ideas are different now and my opinions are different and that’s just a part of life,” she said.

Thorne also discussed the box that Hollywood has tried to put her in- through the image of an influencer and as a former Disney cast member.

Thorne vehemently denied the label of “influencer” for herself.

“Do I like to consider myself an influencer? No. Do I have influence? Yes. Do I think that social media is my main job though. No, definitely not. It’s just a job that I make more money in. So, I do it a lot,” she said.

Thorne also discusses the pressure of public perception from her time as a Disney sweetheart when she played the role of CeCe Jones on the network’s show, Shake It Up.

“Coming up from being a child actress… Disney specifically has its prim and perfect box and you know, I never was that girl… I was always the little shit kicker,” she said. “And so with them putting me in this box was was really a hard box for me to obtain… I’m just trying to get to normal, whatever my normal is, because this person that you love so much, it’s literally not me. I don’t know who that is and I don’t want to be that.”