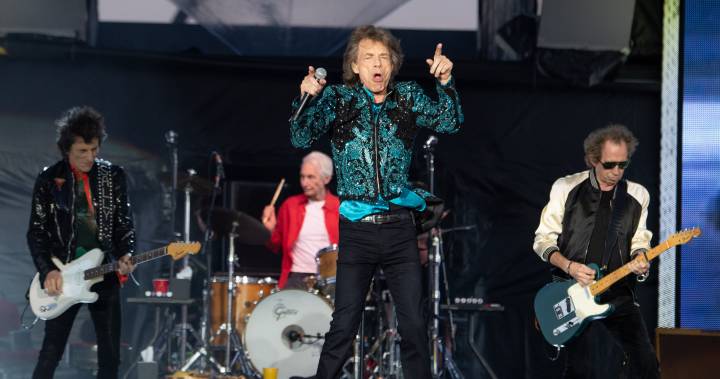 One of the greatest rock n’ roll bands in history, The Rolling Stones, kicked off Canada Day weekend celebrations on Saturday with an energetic, rowdy show at Canada Rocks. Tens of thousands of fans — 71,000 to be precise — descended upon Burl’s Creek in Oro-Medonte, Ont., for the day-long festival.

According to frontman, Mick Jagger, the show marked the band’s 35th in Ontario alone, and since April 23, 1965, The Rolling Stones have established a deep-rooted connection to Canada, frequently make a point of celebrating it.

From headlining Toronto’s biggest-ever charity event, SARSStock, in 2003, to recording multiple live albums across the nation — Love You Live (1975) and Light the Fuse (2012) — the four-piece have created a rich history in Canada and earned the hearts of millions.

Not only did last night’s show mark the only Canadian stop on the critically acclaimed No Filter tour, but it saw the band’s return to the country for the first time in more than six years.

(L-R) Charlie Watts, Mick Jagger, and Keith Richards perform onstage as The Rolling Stones perform for the North American run of their No Filter Tour at Burl’s Creek Event Grounds on June 29, 2019, in Oro-Medonte, Ont.

But this was more than just a concert. Sure, people got to hear some of their favourite Stones classics like Angie and Honky Tonk Woman, and watch a 75-year-old (almost 76!) Jagger parade around in a selection of his finest sequined jackets.

Some may have been there to relive their golden years too, but like it or not, this was bigger than just the Stones. This was a Canada Day celebration done right. A gathering of sorts, or a reunion, if you will.

Here are some of the most memorable moments of the night.

There were fans holding places in line for others they’d just met, strangers, sharing stories and recounting the times they’d seen the Stones in the past. Several went into detail about what the band means to them. There was a welcoming, comforting sense of camaraderie.

People travelled from around the world to be there

Canada Rocks with The Rolling Stones welcomed fans from all over the world. Having a gigantic open field with such a large capacity made it easy for people to attend, last-minute or not.

Folks from all across the continent made a trip out of the highly anticipated show, including people from Ottawa, Detroit, Mich., California and Virginia. There was even a British man who came from across the pond to catch the No Filter tour.

A retired couple who served in the Korean military made their way over too, along with an Irish father-daughter duo who followed the Stones across Europe in 2018.

The open-concept venue produced a  variety of scents over the course of the day. At first, patient fans waiting in line were welcomed to the simple smells of fresh air and nature. Once the gates opened, the smell quickly shifted to a combination of tacos, burritos and piping hot gravy, thanks to a number of delicious and incredibly popular food trucks. Surely there were Sticky Fingers all around.

Sunscreen was shared, beers were shotgunned, ketchup was spilled and fries were pinched, and by the time the gates opened, the event grounds became a sea of lips and tongues.

A right-side stage view at the Canada Rocks with the Rolling Stones concert, at Oro-Medonte, Ont. on June 29, 2019.

The sea of lips and tongues

Tens of thousands of individuals came prepared with their treasured Rolling Stones tour shirts, each carrying its own unique story, whether it dated back to the first Canadian show in Montreal, or it had an oddly specific rip in its armpit.

Many others, including a heartwarming number of youngsters, took to the merch stands to buy what could have been their first-ever concert T-shirts too. The venue offered a shirt specific to Canada, featuring the iconic Stones logo with a giant maple leaf behind it.

People fought for the best spot

With a large demographic of baby boomers, it was surprising to see how fast some individuals ran to the barrier to secure their spots, and for the most part, they stood firmly in place. No washroom breaks whatsoever.

A lesson quickly learned by many: Don’t mess with Stones fans.

Fortunately for drinkers, the vendors provided lids, which meant one could make their way across the venue, with sometimes three, four or sometimes even five plastic cups of beer carefully, but not strategically, stacked in their arms. It wasn’t exactly the same story for those people with tall beer cans, who looked the part of a Monty Python sketch trying to make it back to their spot on the grass.

The result? Many, many spillages and subsequent frowns.

A billboard for The Rolling Stones concert during the Canada Rocks Festival on June 29, 2019 is seen in the Liberty Village neighborhood on June 11, 2019 in Toronto, Ont.

Although it was a generally cloudy day, the sun shone a little too brightly for some and left at least half of us looking more red than we did upon entry.

People passed out from heat exhaustion

At least four people were reported to have passed out from the intensity of the sun, which added an element of drama as the night progressed. Security staff and onsite paramedics joined forces to save the day.

To make matters worse, the venue’s plans for a 100 per cent cashless event backfired.

In the hour leading up to the headlining set, many fans were left in a panic as many of the debit/credit machines began to fail at not only the merch booths but the very crowded beer tents.

The Rolling Stones’ stage before their highly-anticipated performance at Burl’s Creek Event Grounds on June 29, 2019 in Oro-Medonte, Ont.

Twenty minutes of waiting was enough for people to simply ask the vendors to accept their cash, but an additional 20 minutes of waiting turned moods rather grim and resulted in a combination of parched attendees and inebriated troublemakers demanding free alcohol.

Again, the heat really didn’t help but a short while later, the systems were fixed and drinks were drunk.

Concertgoers were treated to an absolutely fantastic lineup of Canadian talent throughout the course of the day, including The Glorious Sons, The Beaches and Sloan. It is Canada Day weekend, after all.

Their high-energy performances worked to keep the crowd energized and warmed up the stage for the Stones. Over-extended intermissions between sets, however, left a large portion of the crowd feeling a little antsy.

The search for shade

With tired feet and sunburns, thousands began scouring the perimeter for even the smallest cut of shade to escape the blazing sun.

A portion of a building crowd at the Canada Rocks with the Rolling Stones concert at Oro-Medonte, Ont. on June 29, 2019.

Whether it was by a tree, under one of the four sets of bleachers or behind the gigantic farmhouse, patches of shade became such a hot commodity that people began bargaining and negotiating for them.

On with the Show

It was almost as magical as each of the Stones’ many outfit changes once 9 p.m. hit. Pure bliss and Satisfaction.

The sun slowly descended and a steady breeze of cool air began to relieve the crowd. Suddenly, the overlying chaos died down and everyone was silent as all eyes went centre-stage.

A brief, condensed, rock n’ roll rendition of O Canada boomed across the Burl’s Creek grounds before the Stones hit the stage. The crowd exploded in applause.

Richards taking lead vocals for Slipping Away was a moment not to be missed too, as well as the incredible vocal duet on Gimme Shelter, which featured backup singer and The Voice winner, Sasha Allen.

“I’d like to thank you all for coming out in the middle of the country,” said Jagger, acknowledging the dedication of his fans.

Despite the venue calling for absolutely no smoking whatsoever, the air was filled with (now legal) marijuana smoke. It’s Only Rock n’ Roll, right?

The Rolling Stones perform for the North American run of their ‘No Filter’ tour at Burl’s Creek Event Grounds on June 29, 2019 in Oro-Medonte, Ont.

Smash-hit favourites like Tumbling Dice, Miss You and Sympathy for the Devil sent a blast of energy into the audience, with crowds of people dancing everywhere you looked.

Smiles were omnipresent, both offstage and on. Wood and Richards often shared a smile or a hug after certain performances, while Watts maintained a focused and rigid composure behind the drums.

Whether you were at the very front of the stage or all the way at the back, there truly was no way you could feel left out of this gig. It embraced everyone on the festival grounds.

Could this be The Last Time we see the Stones in Canada? The band left fans with a cryptic message on their four massive LED screens, reading: “See you soon.” We can only hope that means more Stones in the future for the Great White North.

“See you soon.” The Rolling Stones’ stage after the highly anticipated performance at Burl’s Creek Event Grounds on June 29, 2019, in Oro-Medonte, Ont.