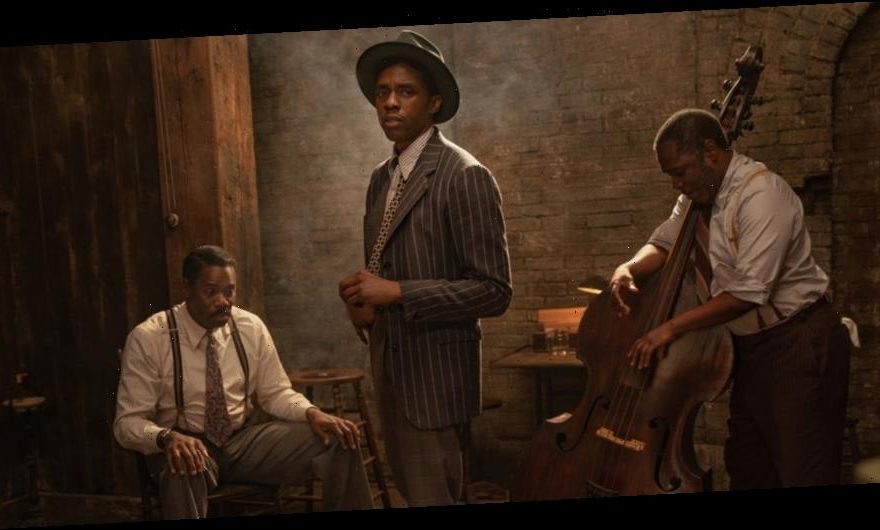 Based on August Wilson’s 1984 stage play of the same name, the events in the Netflix adaptation also take place during one recording session in 1920s Chicago. “Tensions and temperatures rise over the course of an afternoon recording session in 1920s Chicago as a band of musicians await trailblazing performer, the legendary ‘Mother of the Blues,’ Ma Rainey. Late to the session, the fearless, fiery Ma engages in a battle of wills with her white manager and producer over control of her music,” the official synopsis reads. “As the band waits in the studio’s claustrophobic rehearsal room, ambitious trumpeter Levee  — who has an eye for Ma’s girlfriend and is determined to stake his own claim on the music industry — spurs his fellow musicians into an eruption of stories revealing truths that will forever change the course of their lives.”

Boseman portrays Levee and is joined by Viola Davis as Ma Rainey, Dusan Brown as Sylvester, Michael Potts as Slow Drag, Taylour Paige as Dussie Mae, Colman Domingo as Cutler and Glynn Turman as Toledo. The adaptation is produced by Denzel Washington, who once paid for the late actor’s tuition to attend the Oxford Mid-Summer Program of the British American Drama Academy in England. Ma Rainey’s Black Bottom was originally meant for HBO but eventually moved to Netflix and was filmed in Pittsburgh from July to August 2019.