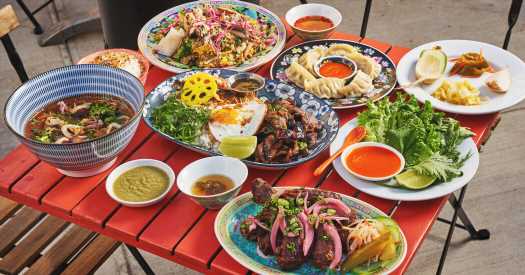 In November, Falansai, a Vietnamese restaurant that had closed at the start of the pandemic, was taken over by a new owner and chef named Eric Tran. I was intrigued by his menu, which included confit duck necks and a seafood curry soup made with peanut milk. The backyard was supposed to be open for outdoor dining on warm nights, but there weren’t any. Too curious to wait for spring, I placed a delivery order, using my own name instead of an alias so the courier would know which bell to ring.

Mr. Tran told me later that when he saw the order, he and his sous-chef asked each other whether they were cooking for the Times restaurant critic.

“Why would Pete Wells order delivery from us?” the sous-chef asked.

I was. But I was on the job, too, and that first order persuaded me to review Mr. Tran’s restaurant without eating on the premises at all. It was the first review I’ve written based solely on takeout and delivery but, as restaurants, and my attempts to cover them, continue to adapt to the pandemic, I imagine it won’t be the last.

For months after all the restaurant dining rooms in the city were forced to close last March, I wrote nothing that resembled a review. The entire business and all the people in it were suffering, and I spent my time as a reporter, finding out how some of them were getting along. I quickly learned that when talking with anybody who had earned a livelihood from restaurants or bars, I needed to budget at least an hour.

Before the pandemic, I normally called chefs after I’d written a review of their restaurant but before it was published, to check facts. The chefs usually sounded as if I were calling with the results of a lab test. One chef called me back from a hospital and told me his wife was in the next room giving birth to their first child, but — oh no, don’t worry, it’s fine, he said; in fact, I’d picked a perfect time to call! These were, in other words, awkward conversations.

The ones I had last spring were different. It was as if the fear and distrust all chefs feel toward all critics were gone. They talked about going bankrupt, they talked about crying and not wanting to get out of bed. What did they have left to lose by talking to me?

By June, the crisis had settled into a kind of desperate stability. I was starting to run out of restaurants-in-extremis ideas when, midway through the month, the city announced that restaurants could serve on sidewalks and in the streets. On the day outdoor dining began, I rode my bike into Manhattan to have lunch at the first open restaurant I could find. I was as thrilled to eat someone else’s cooking as I was to do something that resembled my old job.

It still took a few weeks before I wrote any reviews. At first, I worried that any opinion of mine would be unfair when restaurants were trying so hard to adapt to the new reality. Eventually, I understood that that was exactly what would make the reviews worth writing. Good food in a pandemic was great; great food seemed like a miracle, and I was finding great food all around.

My pandemic reviews note the ways that restaurants have trimmed menus and simplified dishes, but even the shorter, stripped-down versions had a lot to praise. There was something that got to me about these small businesses — some of which had opened in the pandemic, all of which were fighting for survival — trying to bring New Yorkers some joy while keeping them healthy. I didn’t want to just report on it. I wanted to bang a drum so people would pay attention.

The decision not to put stars on the reviews, as The Times has since the 1960s, was easy. Formerly, I tried to make the stars reflect how close any given restaurant came to being an ideal version of itself. But in the pandemic, there were no ideal restaurants, only places that were making it up as they went along.

Almost everything about outdoor dining appealed to me: the street life, the flower pots, the shoestring architecture of in-street platforms. Even the weather played along, staying mostly dry and temperate nearly through the end of December. But there was no question that by Christmas it was getting too cold to dine al fresco.

In my reporter mode, I had been told by scientists, airflow engineers and other experts how Covid-19 is transmitted, and all last summer and fall I felt fairly certain that eating outdoors could be relatively safe for everyone. (Some public-health experts believe that now, even outdoor dining in New York City is unsafe while the local risk of Covid transmission remains very high.) I did not have the same certainty about dining indoors or about some of the plywood structures I call enclosed porches, particularly their windows and doors, which are closed so they have almost no ventilation. I have walked away from several of those.

I wanted to keep reviewing restaurants, but I didn’t want to go back into their dining rooms both because of the risk and because I was afraid readers would take it as an all-clear signal. When the governor halted indoor dining again in December, my selfish reaction was relief. Then I briefly got depressed. How would restaurants survive? And how would I keep writing about them?

One answer had already started to appear on sidewalks and streets in the form of small greenhouses, huts, tents and yurts. Inside these personal dining rooms, you can (and should) sit just with people from your own household. If the restaurant thoroughly airs the space out between seatings, any germs you breathe in should be the same ones that are bouncing around your home. Many restaurants instruct their servers to stay outside the structures as much as possible, though some don’t.

Indoor dining is back on in New York, but for now, I order more takeout than I’ve ever done in my life. I am still going on my rounds, too, but I dress differently these days. The other night, I put on thermal underwear, thick wool socks, a heavy shirt, synthetic-blend trousers and a bulky sweater. After lacing up my lined hiking boots, I packed a scarf and a Microfleece travel blanket into a tote bag. Then I strapped on a couple of masks. I looked like I was embarking on an overnight snowshoeing trek, but I was only going to Manhattan to chase down some tacos.