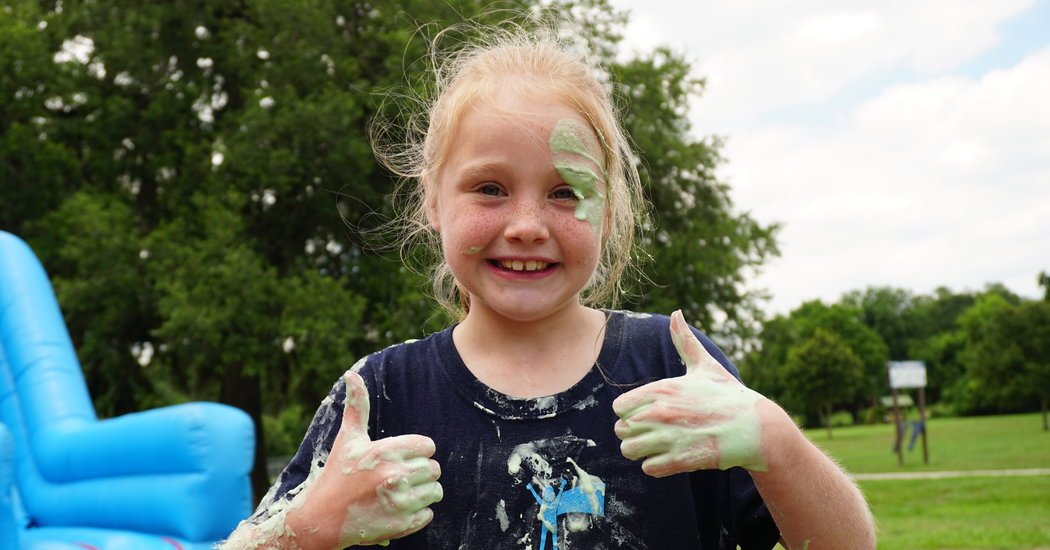 For 8-year-old Ella Maners, the highlights of a week at summer camp were playing Pictionary by drawing in shaving cream with her toes and careening down a water slide.

They sound like typical camp fare, but for Ella and other children who attend the Fear Facers Summer Camp in Gainesville, Fla., the activities are designed to help them deal with obsessive-compulsive and anxiety disorders.

“Playing Pictionary with shaving cream and using your toes gets kids who have fears of chemicals to touch the cream, while kids with a social phobia get a chance to draw a picture and possibly fail at having someone guess what it is,” said Robyn Nelson, the camp’s coordinator. “Sliding down the water slide into a mat filled with who knows what challenges those with fears of germs. They challenge their own personal fears within these activities.”

The camp, hosted by the Center for O.C.D., Anxiety and Related Disorders at the University of Florida, mixes one-on-one therapy and counseling with typical camp activities to give children — some of whom have never attended a camp before — the experience of a summer ritual.

“The basis of the camp is to challenge their fears and to show they are not alone in their struggles,” said Dr. Carol Mathews, the camp’s medical director and the center’s director. “This camp is for kids who have spent all their time avoiding their fears or triggers, and their parents have been doing their best but haven’t been able to do anything to successfully challenge that.”

The camp, in its third year, holds two one-week day camp sessions in June and July for children ages 7 to 15, who come from across the country.

Other programs aim to help children address rather than avoid their fears, though some are for older children and offer overnight programs.

At the Fear Facers camp, “We get into the trenches with the kids, we do everything they do to help them learn to cope with their fears,” said Ashley Ordway, the camp’s co-clinical director. “This environment is so special because even if the kids are in different phases of their treatment and facing their fears, they are very supportive and helpful of each other when they see someone struggling in an area where they are not.”

“We all have occasional fears that go away without treatment, like being afraid of the dark, or the fear that someone is going to break into your house and kill you,” Dr. Mathews said. “O.C.D. is not the existence of these illogical thoughts, it is the inability to suppress them. The brain doesn’t shut down these thoughts, so if the thoughts keep coming back, your brain starts signaling that I might really need to worry about this.”

Well-intentioned parents often try to help calm their children’s fears by helping them avoid the triggers — such as allowing a child who is afraid of the dark to sleep with a lamp on — but experts say that exposure and response prevention, a form of cognitive behavioral therapy (CBT), is a better way of learning to deal with the fear.

The camp days are divided into taking part in group activities and one-on-one therapy and counseling. Each camper is assigned a therapist and a counselor for the week. The counselors stay with their campers the entire day.

The families pay a registration fee of $200, which helps to cover the costs of the space and supplies. The campers’ insurance is billed for therapy; the camp counselors, who are mostly undergraduate students, volunteer their time.

On the first day of camp, the children come up with “fear hierarchies” with their therapists, which is a standard treatment for O.C.D., Dr. Mathews said.

“You write down all the fears you have and then you rate them from 1 to 10, with 10 being the highest, meaning there is no way you are going to make me do that,” Dr. Mathews said.

The children who attend the camp often have several fears they are trying to overcome.

Ella said she is terrified of tornadoes and getting sick. She and her mother, Katie, traveled from their home in Nashville to attend therapy sessions in the clinic, and to attend the June session of the camp, which had been recommended to them by one of Ella’s therapists.

With her counselor, Ella worked her way through her hierarchy to face her fears. First, she sat in the bathroom with all the lights off as if a storm had knocked out the power. Then her counselor played a recording of a tornado siren, trying to simulate a tornado drill, like the ones held at her school. Ella moved up to watching tornado videos.

After every challenge, Ella got a bead to create a necklace. On the last day of camp, she counted her beads: 42. But she gave one to a friend and another to her counselor.

“They did not present Ella with one challenge that she has not been able to do,” Ms. Maners said. “Every one of those beads, she earned.”

Samuel Katz, 12, from Atlanta, learned to cope with his fear of touching something that was very textured on one side but not on the other.

“My counselor made slime and spit in it, put other gross things in it,” Samuel said. “I couldn’t touch it at first, but we worked on it and I was able to complete the challenge and touch it.”

Samuel also took part in the camp’s version of kickball, where the bases were big blue mats loaded with things that looked like vomit and slime.

“We learned how to slide into the bases, and it was really fun,” Samuel said. “I could stay at this camp all summer.”

Dr. Mathews cautions that the camp is not a cure for O.C.D.

“You can’t make a huge difference in a week. What it really does is give the kids the ability to own their treatment and continue it,” she said. “And their parents gain the ability to understand how the treatment helps their children.”

Dr. Joseph McNamara, the camp’s clinical director and the center’s co-director, said incorporating parents into the camp is important.

“We call it counterintuitive parenting. It turns what we think of as good parenting upside down,” Dr. McNamara said. “Parents want to protect their children from what they are afraid of, but that’s making their O.C.D. worse, and that is not their intention at all.”

Ms. Nelson, the camp’s coordinator, has a diagnosis of O.C.D. herself. She said she wants kids who come to the camp to learn to live full lives.

“I want people to know that I live a very happy functional life and I have O.C.D.,” Ms. Nelson said. “This camp can be very impactful to help you know that you are not alone, and you can have a normal sense of life.”

Ella and her mother measured its impact in their own way: On the last day of camp, Ella was asking to return next summer.

“It was really fun and they really helped me,” she said.