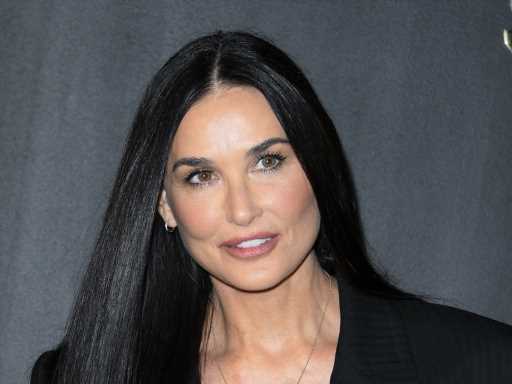 Demi Moore has been keeping a secret from all of her fans, but now she’s ready to reveal it to the world. The 59-year-old actress has been cooking up a hot romance with celebrity chef Daniel Humm — and now they are Instagram official!

Moore gave her followers the cutest introduction to the Swiss culinary expert by teasing a shadow image of them holding hands and writing, “Visiting the palace of kings and queens… Swipe to see the queen.” With a slide of the finger, her fans were able to see a joyously happy Moore cuddled up with Humm as he sweetly kissed her forehead. Even her itty-bitty dog, Pilaf, makes a cameo in the third shot as the couple laughs toward the camera while the puppy strikes a very regal pose.

The trio even made the trip to the French Open with prime seats to watch all of the tennis action (it looks like Pilaf loves a good tennis match). Humm even got in on the action reposting Moore’s images to his own Instagram Story — so it looks like their love is firing up on all burners. He’s well known for his restaurant empire, including Manhattan’s Eleven Madison Park, NoMad in NYC and LA, and his cookbook series, so Moore is likely eating well while dating the chef.

Moore opened up about her love life in her 2019 memoir, Inside Out, and talked about her three marriages to Freddy Moore, Bruce Willis, and Ashton Kutcher. She was frank when explaining about what happened at the end of her union to Willis, writing in her book, “I think both of us from the outset were more passionate about having kids than we were about being married.” She explained that it took a lot of healing and self-love to recover from the trauma of her childhood and choosing men who weren’t the best fit for her emotional needs. So, let’s hope Humm is exactly the person she needs to simmer with and enjoy a blossoming summer love.

Before you go, click here to learn more about celebrities who’ve opened up about dating after divorce.